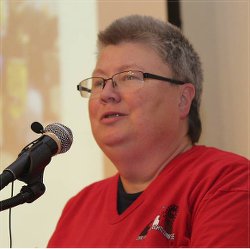 The following talk was given by Martha Grevatt, a longtime auto worker and unionist, at the Workers World Party national conference Nov. 7-8 in New York City.

The great thinkers of Marxism, including Marx himself, had a way of anticipating developments. Marx could see in 1848 that the system of capitalist wage slavery would [bring] feudalism to the ground and overrun the earth.

Our founder, Sam Marcy, had a knack for reading trends. [His book] “High Tech Low Pay,” written in 1984, stands the test of time. Like the “Communist Manifesto,” it is 100 times more true today than when it was written.

“Statistics appear almost daily in the bourgeois press which show how much of the working class today is Black, Latin, Asian, Native as well as women,” Sam wrote. “The most recent study shows that white males are no longer predominant in industry. The workforce is already composed of over 40 percent women.

“Joblessness is only one aspect of the changing nature of work in America. The pauperization of work is increasingly evident.” Sam cited Bureau of Labor Statistics reports showing that of people who lost full-time jobs during the Reagan recession, 46 percent were working for less and 45 percent were still unemployed. There is nothing different three decades later.

The pauperization Sam described reflected a cataclysmic shift from an industrial to a service economy. But the traditional union base, the industrial working class, has been pauperized as well. Among those demanding $15 and a union are workers in non-union auto parts factories making barely above minimum wage.

Even the union wage in manufacturing has been pulled down. After the [1981] breaking of PATCO [the Professional Air Traffic Controllers Organization], the bosses were able to wrest previously unthinkable concessions. A scourge, an evil menace to union solidarity, began to appear in labor contracts: two-tier. It was a clever way to push wages down — leave the wages of current workers alone but pay future workers much, much less.

In 2007 two-tier came to the [United Auto Workers] contracts with the Big Three auto companies [General Motors, Ford and Chrysler]. Since then tens of thousands of lower-paid workers have been hired, replacing higher-seniority workers who left the companies during bankruptcy. This has brought many more workers of color and women into the industry.

Sam commented about the fight for comparable worth — to make the work traditionally performed by women pay what comparable male jobs pay. [He said] it “has broad implications for labor as a whole, since it is an effort to level wages upward by increasing the wages of the lowest-paid at a time when the whole thrust of the capitalist economy is to level wages downward.” He could have been writing today about the fight to break up the two-tier pay structures.

That is the meaning of the Chrysler contract struggle. The class collaborationist UAW leadership brought a contract to us for a vote — a contract praised by Fiat Chrysler Automobiles (FCA) CEO Sergio Marchionne — that institutionalized two-tier pay. A revolt erupted.

Not only was the contract voted down 2 to 1, but there was organized opposition in the form of T-shirts, leafleting, rallies, social media campaigns, and more. At a parts warehouse in California, first- and second-tier workers came together, making T-shirts that read, “Solidarity, no more tiers, vote no.” In Toledo they chanted, “Hell no, Sergio.”

We didn’t know what might happen if we voted the contract down. But even without the backing of our leaders and with an anti-worker company management, we took a stand for a basic principle: equal pay for equal work.

Many of these workers voted to allow two-tier in 2007. What has happened?

Marx understood that under capitalism, ownership is individual but production is social. To introduce two-tier the bosses and labor statesmen appealed to bourgeois individualism — i.e., “It won’t affect your pay or your jobs” — but now we are all working together. We have reached a consensus: two-tier must go.

The next contract that was brought to a vote passed overwhelmingly. There were a number of problems, and if you read it cover to cover, there are more tiers than before. But the lower-paid workers are getting substantial raises and now have a path to top pay.

It wasn’t what the company wanted, and it wasn’t in the strategy of the UAW leadership. But we fought and won, and that has ramifications for our whole class. Thousands of workers are moving out of what are near-poverty wages for a family. Even the bourgeois media has credited the UAW with setting the wage bar higher, calling it a boost to the Fight for $15 and a union campaign.

Workers in the non-union parts plants and at foreign transplants are calling the UAW, wanting to be organized. That should be a lesson to the leadership, who argued that we could not win decent contracts until we organized the transplants. Anti-concession rank-and-file activists argued that you won’t ever organize the transplants until you show the bosses we still have a union spine and we demand decent contracts with equal pay for equal work.

This contract revolt was an open repudiation of class collaborationism.

The standard established by FCA workers raised the bar for negotiations at Ford and GM, whose profits are through the roof. Workers want back everything they gave up. As our comrade Larry Hicks, a GM worker, told the Detroit News, “They’ve got plenty of money so let us get some of that money.”

At GM second-tier workers not only have a path to top pay, they now receive equal health benefits. In that sense the GM contract is better than the FCA contract. Even so, 42 percent of the workers voted no.

Under socialism equal pay — a concept of bourgeois law but unattainable under capitalism without a fight — will be the norm; there will be no tiers. In “The State and Revolution,” Lenin explained, “The whole of society will have become a single office and a single factory, with equality of labor and pay.

“But,” Lenin elaborates, “this ‘factory’ discipline, which the proletariat, after defeating the capitalists, after overthrowing the exploiters, will extend to the whole of society, is by no means our ideal, or our ultimate goal. It is only a necessary step for thoroughly cleansing society of all the infamies and abominations of capitalist exploitation, and for further progress.”

Hell no, Sergio, your capitalist system has got to go!