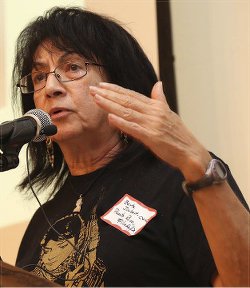 The following talk was given by Berta Joubert-Ceci at the Workers World Party National Conference Nov. 7-8 in New York City.

I am so glad that this conference’s title is “Putting revolutionary socialism on the table.” And I add, “at the time of capitalism at a dead end.” Because we, in the socialist and in the general progressive movement, need a serious and deep discussion on how to defeat capitalism. Not with reforms, not with patches; we need a structural change.

We need a system more humane, one that does not let a child die for lack of medicine and spends billions — billions — to build sophisticated weapons to kill people, both here and throughout the world.

We need a new, humane, system. We need socialism! Socialismo o muerte, they say in Cuba: Socialism or death!

No reforms, as progressive as they can be, and no development that benefits the people, the poor and the oppressed are safe as long as capitalism, and particularly U.S. imperialism, has a foothold.

Fidel said it a long time ago when talking about racism and the antiracist struggle in the U.S.: As long as imperialism is standing, racism will not end. Imperialism nurtures racism, profits from it! And from all the differences that it can use to divide the working class, keep it divided, fighting among themselves so they don’t unite and fight against the capitalists.

Today I am speaking on Latin America. Why this introduction? Well, that is precisely why. For several years I have been reporting on the advances and the turn to the left in that region. That is still generally true. But I wanted to raise the difficulties confronted by the progressive movements and governments there, because many of those difficulties arise from U.S. imperialism right here.

The great achievements won in the region are too much for imperialism to bear! How dare they speak with their own voice and create regional organizations in which the U.S. is not allowed? Be independent? Try to trade with countries other than the U.S., in fact, with countries considered by the U.S. as “enemies” or even “terrorists”? Kick some U.S. military bases and U.S. agencies out? How do they attempt to use their national resources to improve the lives of their peoples, instead of letting U.S. corporations extract endless profits? How do they isolate the U.S. and support Cuba? And so on.

So now the U.S. has intensified its intervention in the region, aligned with the reactionary right wing of many of those countries to sabotage the progressive processes. Capitalism in its final, dead-end phase is trying to turn back the forward march.

The capitalist crisis has hit the whole world, and Latin America is not an exception. The crisis is global, but so also is the struggle. The masses, the social forces in Latin America, are still fighting, still demanding their rights. Mexico, Honduras, etc.

There are two camps worldwide: The capitalists together with those who serve them and the masses fighting at a global scale.

But I want to focus on one country, one that for a long time was not even considered Latin American: Puerto Rico. The one that has been in the news because of the immense debt of $73 billion — four times the debt of Detroit.

Puerto Rico is the perfect example of the virulence of capitalism in its final dead-end stage, how it operates, with no disguise, to benefit capital. It shows the anarchy and the corruption at all levels tied to capitalism.

Puerto Rico is a colony of the U.S. What does that mean? It has no sovereignty, none. Foreign capital owns everything, decides everything. The island’s government is just a figurehead; Wall Street and the Pentagon, through the U.S. Congress, are the real rulers.

Puerto has been a laboratory for U.S. practices since the U.S. invaded us in 1898. Some of these practices were also performed on the Native and on the African-American people here. But all of them were practiced in Puerto Rico. Erasing our history and our heroes; trying to suppress our language and our flag; using us for pharmaceutical experiments; sterilizing our women; using our land to test toxic weapons and to practice for military interventions in other countries; targeting, killing and imprisoning the independence movement; etc. — a long et cetera.

But one of the most criminal practices has been the economic destruction. It has left Puerto Rico in a deep depression. All the measures to deal with the current crisis are to benefit the bondholders in Wall Street, many of them hedge funds or “fondos buitres” — vulture funds.

The enormous productivity of capitalism because of the implementation of high technology has also affected the island by reducing the workforce. The manufacturing sector, in foreign hands of course, has seen such an increase in production that it no longer needs so many workers.

The Puerto Rican government’s measures are to squeeze the workers and the poor to pay bondholders. And while the people are getting increasingly poor, laws have been implemented to give a free ride to billionaires from the U.S. by exempting taxes from their profits made in Puerto Rico! More than 500 have already moved to Puerto Rico to take advantage of this. They take the best land, the most precious beaches. And they are only required to open three jobs there.

For the people, instead, are increasing taxes, higher cost of utilities, gasoline, medicines, expensive health care. Just one example: Medicare, which is deducted from the wages at the same rate as here, provides only almost half of the benefit. And while Medicare benefits will be raised in the U.S., in Puerto Rico it will be lowered even more — by 11 percent.

The government is paying millions in contracts to many U.S. firms to “solve” the crisis. Economists from the International Monetary Fund have produced a report that the government is now trying to impose. Privatization of education, electricity, water and sewage, and roads; cuts in wages; an increase in university tuition; etc. The airport was already sold.

Recently it was reported that Standard and Poor’s, the very agency that has degraded Puerto Rico bonds to junk status, will be given a more than $300,000 contract to “help” the national electric company improve its bonds to A category.

But, comrades, the people in Puerto Rico are fighting back. They are holding people’s assemblies to inform people about the consequences of the government’s reforms. There is a call for a general strike that we should support in any way possible here, as it is a global struggle.

U.S./Wall Street out of Puerto Rico!