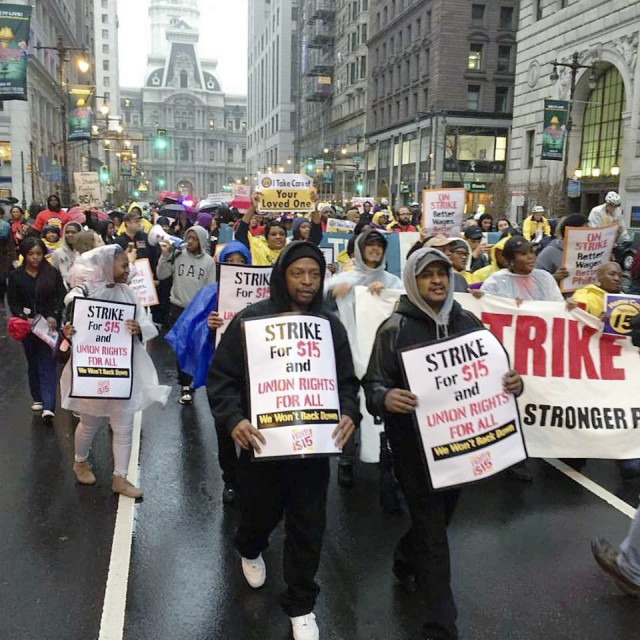 A wave of strikes and protests by low-wage workers fighting for a $15 minimum hourly wage and a union swept the U.S. on Nov. 10, and made this the largest day of action ever as this movement enters its third year. From Boston to Los Angeles; Seattle to Chicago; New York to Durham, N.C.; and Philadelphia to Atlanta, nearly every major city saw strikes at fast food restaurants during the work day and larger demonstrations in the evening. In total, some 500 cities counted strikes and other actions throughout the day.

Fast food, home health care, childcare, airport, retail and low-wage workers from many other sectors took to the streets to raise their demands for $15 and a union. What began in November 2012 with a group of fast food workers in New York City who walked off the job has since sparked a national movement that has become a rallying cry for workers everywhere. 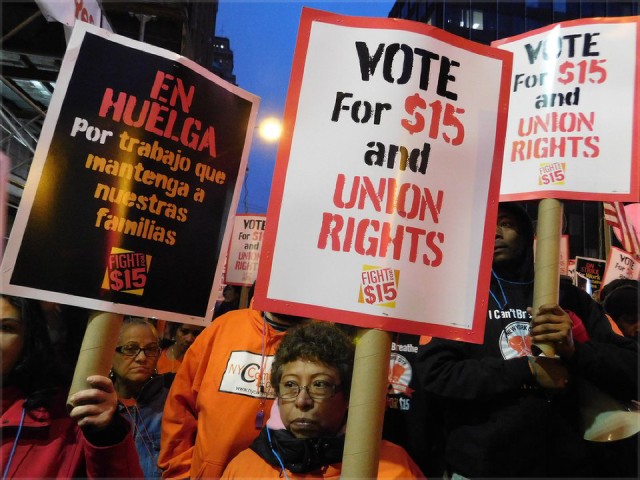 An encouraging development with the latest round of strikes is the growing alliance between the Black Lives Matter movement, the immigrants’ rights movement, and the fight for 15 and a union. In many cities, visible contingents were organized by Black Lives Matter and immigrant rights activists within the demonstrations, and many speakers raised the connection between the low-wage workers struggle and the fight against racism and police terror.

On the same day, a demonstration of many thousands confronted the Republican presidential candidates debate in Milwaukee. The demonstration raised the demand for $15 and a union, to end racism and police violence against oppressed communities, to stop deportations of immigrant workers, and many other issues. Nate Hamilton, the brother of Dontre Hamilton, who was murdered by the Milwaukee police, was a featured speaker at the demonstration.

Most of the demonstrations around the country on Nov. 10 ended with protests outside of city halls, with calls for the elected politicians — who represent the bosses and their interests — to take action around the demands for $15 and a union.

A key question for this movement — an upsurge that has been marked by militancy and the leadership of Black and Latino/a workers, along with many women and young workers — will be whether it will maintain its independence in the face of the looming 2016 presidential elections. These elections tend to pull popular movements away from strikes and street action, which is what is needed, into the framework set by the two major political parties, both of which represent the interests of the big capitalists and bankers. 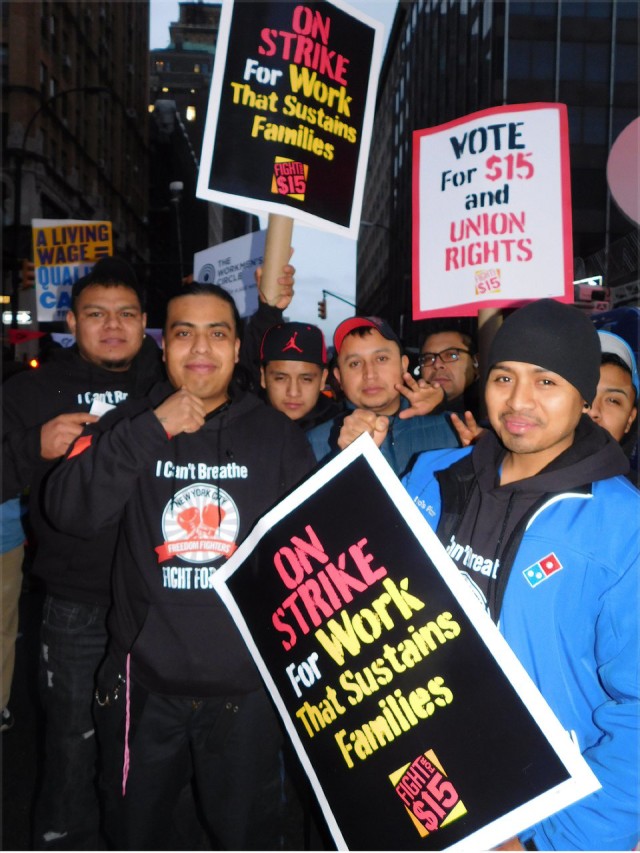 The courageous actions by low-wage workers, who have gone on strike multiple times in the last several years and have helped breathe new life into the U.S. labor movement, clearly demonstrate their commitment to staying the course and seeing this struggle through. That these workers are now broadening relationships with the Black Lives Matter movement and others indicates a new potential for this movement to expand and deepen.

Since the Republicans are more openly reactionary and anti-labor, the question is whether this dynamic workers’ movement will avoid being drawn into the Democratic Party circles and misled into the electoral arena as the 2016 presidential contest draws closer. It will be up to the workers on the front lines of this struggle and the broader movement that has mobilized to support them to maintain an independent course.