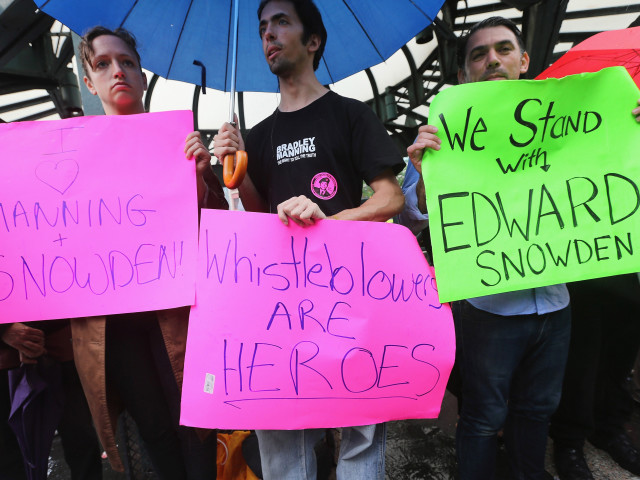 Good news is hard to find, especially since the U.S. capitalist media try to bury a lot of it. Here’s a recent example:

The European Parliament, a body that is directly elected by the people of all 28 European Union member states and is more reflective of their opinions than many governments, voted on Oct. 29 that each EU country should “drop any criminal charges against Edward Snowden, grant him protection and consequently prevent extradition or rendition by third parties, in recognition of his status as whistleblower and international human rights defender.” (theguardian.com, Oct. 29)

While not directly enforceable, the resolution expresses the anger of many in Europe against the worldwide electronic “surveillance” campaign conducted by the National Security Agency, a massive U.S. spying organization. And it expresses the strong popular support for heroic whistleblowers like Snowden and Chelsea Manning, who have faced exile or imprisonment for exposing U.S. crimes, both here and abroad.

This vote reveals how unpopular U.S. imperialism and its political leaders have become, even in so-called allied countries.

The response by the U.S. government was not surprising. “Our position has not changed,” Ned Price, spokesperson for the National Security Council, said in a statement emailed to the Guardian. “Mr. Snowden is accused of leaking classified information and faces felony charges here in the United States. As such, he should be returned to the U.S. as soon as possible, where he will be accorded full due process.”

The “due process” that Price is talking about is prosecution under the draconian Espionage Act of 1917, which would even forbid Snowden from arguing in his defense that his disclosures benefited the public.

That same law was used to jail courageous unionist and socialist Eugene Debs for years because he spoke out against U.S. entry into World War I. Later, it was used to execute both Julius and Ethel Rosenberg on falsified Cold War espionage charges. It was used to sentence Chelsea Manning to prison for decades for exposing U.S. war crimes in Iraq.

This law is not justice. It is simply a grotesque blueprint for retribution against those with the courage to expose the atrocities of imperialism. Stop the persecution of Edward Snowden! Free Chelsea Manning!