Congress is expected to vote on Oct. 29 on a federal budget “compromise” between Republican congressional leaders and the Obama administration. The budget is expected to pass quickly and avoid a repeat of the 2013 government shutdown, when hundreds of thousands of federal employees were laid off without pay and vital government programs were suspended. The U.S. Treasury Department reports that without this deal the debt ceiling limit would be reached by Nov. 3. 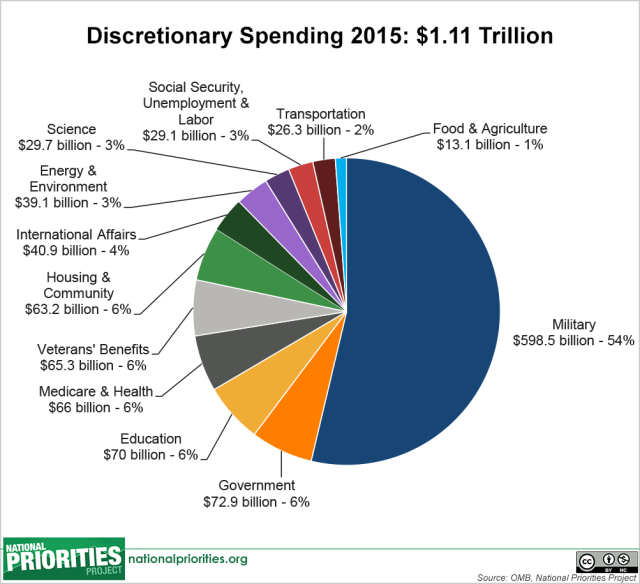 The basic deal increases the federal budget by $80 billion for the next two years, $50 billion in the first year and $30 billion in the second year. About half of the increase is earmarked only for the Pentagon, the remainder for unspecified “discretionary spending.” Those increases come at the cost of massive cuts to Medicare and Social Security payments to workers with disabilities (SSDI). The deal also includes additional funding of $32 billion dollars in the “Overseas Contingency Operations Fund” (OCO), to fund the ongoing U.S. imperialist aggression against Syria, Iraq and Afghanistan. (Huffington Post, Oct. 26)

The Military Times, which caters directly to the U.S. Armed Forces, reports on Oct. 27 even larger increases to the Pentagon under the new deal. It projects that the 2016 and 2017 Pentagon budgets would each be increased by $25 billion, to a total of $548 billion in 2016 and $551 billion in 2017, not counting the OCO funding specifically for the ongoing U.S. wars. The Military Times reports an additional $59 billion a year for the next two years to fund the attacks on Syria, Afghanistan and Iraq.

At the same time as the budget announcement of massive increases in military funding, the Pentagon is recommending increasing the deployment of U.S. soldiers on the ground in Iraq and Syria. The Oct. 27 Washington Post reports that the plan would put U.S. Special Operation forces, commandos, on the ground in Syria and increase the role of U.S. troops in Iraq, a serious escalation. Simultaneously, the secretary of defense seeks to expand U.S. attacks in Afghanistan.

The increased U.S. force in the region comes as Russian forces have reportedly had widespread success in pushing back the Islamic State in Syria and assisting the Syrian government against U.S.-backed insurgents.

Austerity for people with disabilities and elderly

The increases to Pentagon spending for imperialist wars will be paid for directly by slashing needed support for elderly workers and those with disabilities. The money comes from two main cuts, one to Social Security disability benefits, which provide monthly payments of a modest income to workers who can no longer work; the other to Medicare, which provides health insurance to elderly and retired workers, as well as some workers with disabilities.

Another major cut to workers’ benefits in the proposed budget is to extend a reduction in the amount that Medicare will pay to doctors and medical providers for their services. The 2 percent cut to doctors and medical providers will result in drastically limiting access to health care, especially in poor and rural areas. In these areas, especially in parts of the U.S. South, where there are greater percentages of older workers and those with disabilities hospitals have been closing rather than accept cuts to their profits.