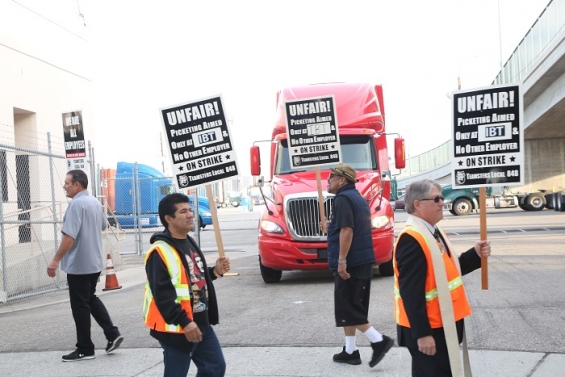 The latest strike by truck drivers and warehouse workers at the ports of Los Angeles and Long Beach ended after five days on Oct. 30. Both groups of workers, mostly immigrants who are classified as “independent contractors” rather than employees, have been fighting wage theft, hostile bosses and unsafe working conditions for years. The Warehouse Workers Resource Center noted Oct. 29 that the number of workers participating in the unfair labor practices strike at the California Cartage warehouse, which services Amazon, Lowe’s, Kmart, Sears and other large retailers — and handles 40 percent of U.S. imports processed through these ports — has doubled since they struck Sept. 22-24 for the first time. Fourteen drivers filed wage and hour claims valued at $3.5 million with the California Division of Labor Standards Enforcement on Oct. 30. One claim presented wage-theft evidence of $450,000 over three years.

Teamsters President James Hoffa joined the picket line Oct. 29, and the Los Angeles City Council on Oct. 30 passed a resolution unanimously supporting the workers. The public is urged to sign the following petition: “We demand that Amazon respect the supply chain workers that bring us Amazon’s goods. End the wage theft, the disrespect and misclassification of your supply chain workers!” (tinyurl.com/qh74g5e)

A deciding factor in this struggle could be the Aug. 27 National Labor Relations Board ruling that companies can be held responsible for labor violations committed by their contractors. These truck drivers and warehouse workers are in the front lines of this important battle, which will benefit all low-wage workers. (For current information, follow “Justice for Port Drivers” on Facebook.)

After four years of failed negotiations and no contract, the Independent Pilots Association, representing 2,500 United Parcel Service pilots, voted Oct. 23 to authorize a strike. The vote, a resounding 99.6 percent in favor, means the IPA executive board can pull out of deadlocked federal mediation and call a strike. (ipapilot.org, Oct. 23)

In a bold display of class solidarity, Teamsters President James Hoffa and Secretary-Treasurer Ken Hall pledged the union’s full support: “If a strike is necessary, we will not cross your lines, but will stand with you on them.” The Teamsters represent more than 250,000 UPS workers; a strike by both unions would bring UPS to a grinding halt. “The Teamsters have not forgotten the solidarity that your members showed us in 1997, when not one single IPA member crossed our picket lines.” (ipapilot.org, Oct. 22)

One of the largest private sector contracts — the Kaiser Permanente national collective bargaining agreement covering 105,000 health care workers in 28 union locals in eight states and the District of Columbia — was ratified Oct. 21. It increases the wages of registered nurses, maintenance and service workers, technicians, lab scientists, optometrists and others. It also sets standards to improve the quality and safety of health care. Lavoris Harris, secretary-treasurer of Food and Commercial Workers Local 400, representing more than 1,000 Kaiser workers in D.C., said the negotiation process “galvanized member activism. There is great energy and a wonderful spirit of participation. That will serve us well in implementing the contract and in improving working conditions for our members.” (dclabor.org,Oct. 21)