Just a month after the Pentagon admitted that its $500 million program to arm and train “Arab opposition forces” in Syria has failed, with only four or five so-called fighters trained, the Obama administration announced that some 50 U.S. Special Forces “advisers” are being sent to Syria. 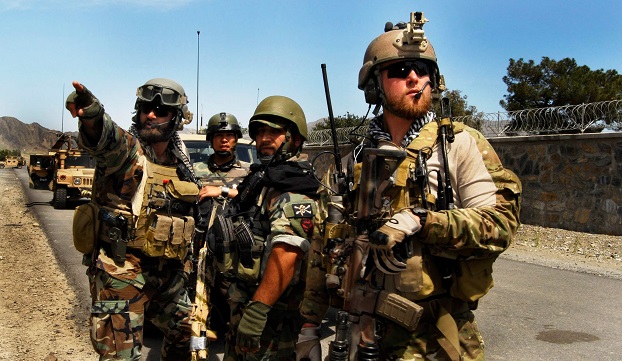 This escalation represents a new attempt by U.S. imperialism to restart another proxy war in the Middle East. Clearly Russia’s assistance to the Syrian government in fighting the Islamic State forces (also called ISIS) has complicated U.S. imperialism’s plans. Aaron Miller, a vice president at the Woodrow Wilson International Center for Scholars, describes the U.S. strategy behind sending troops into Syria: “Keep your eye on ISIS, keep your forces out of Russia’s way and yet enhance your profile after Moscow has raised theirs.” (New York Times, Oct. 30)

Along with the Special Forces troops, the Obama administration announced that the Pentagon is deploying A-10 and F-15 warplanes to Incirlik Air Base in Turkey. These planes are specially designed to provide “support” for ground troops.

And thousands of U.S. soldiers are now “redeployed” to Iraq, in what the Pentagon blithely calls a “training and advisory role.” (theguardian.com, Oct. 30)

The U.S. sees the brutal civil war in Syria as an opportunity to rid itself of the government led by President Bashar al-Assad, which has consistently stood up for Syrian sovereignty. The fact that this war has cost the lives of tens of thousands of people and displaced millions from their homes means nothing to the Pentagon, Wall Street and Washington.

Sending in U.S. troops clearly breaks a pledge that Obama made in 2013, when during a speech he said, “I will not put American boots on the ground in Syria.” (USA Today, Oct. 31) This echoes the pledge made by Lyndon Johnson during his 1964 election campaign to not send regular U.S. troops to Vietnam at a time when Special Forces were already deployed.

That broken promise cost the lives of tens of thousands of U.S. troops and millions of Vietnamese. For decades people in the U.S. were painfully aware that any initial use of “advisers” might easily lead to a full-scale intervention.

Of course, the U.S. government says that this new campaign is directed solely against the Islamic State forces. But by sending in U.S. troops to assist so-called moderate forces that are fighting the Syrian government, the U.S. is clearly still targeting the elected government of Syria.

That makes this war move an extremely dangerous escalation. The Russian government is conducting what appears to be an effective air campaign in Syria in alliance with the Syrian army against the ISIS forces. Thus, the Pentagon is clearly using these few U.S. Special Forces as a “trip wire,” signaling to Russia that it is ready to drastically widen the war even so far as a global conflict in order to overturn the Syrian government.

“The Pentagon wants to build a firewall behind forces allied with the United States — both the Kurds and the Syrian-Arab coalition backed by Mr. Obama — to allow these fighters to hold territory they have captured.” (nytimes.com, Oct. 31)

And what is the Obama administration using as legal justification for its military campaign? “The Constitution requires Congress to declare wars, but in this case, Obama said he doesn’t need lawmakers’ sign-off because a sweeping (Bush-era) 2001 ‘Authorization for Use of Military Force’ covers his actions.” (huffingtonpost.com, June 3)

Since Congress is unable and Obama unwilling to stand up against a new Pentagon war adventure, then it’s clearly up to the anti-war movement and the people to do so — in the streets!