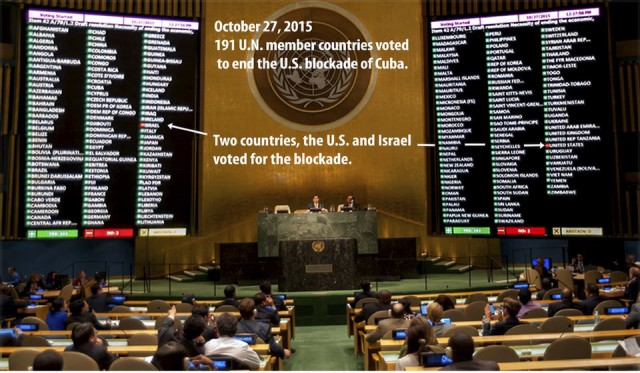 General Assembly 70th session: 40th plenary meeting
Necessity of ending the economic, commercial and financial embargo imposed by the United States of America against Cuba: report of the Secretary-General A/70/120 and draft resolution A/70/L.2 [item 42]

On Oct. 27, for the 24th time, the Republic of Cuba presented a resolution to the United Nations General Assembly calling for the United States to end its economic, commercial and financial blockade of Cuba. In an unambiguous vote, U.N. member countries delivered a stunning rebuke to U.S. imperialism: 191 voted to end the blockade. Only the U.S. and Israel voted to maintain it. It is noteworthy that Israel cited its “special relationship” with the U.S. to excuse its vote.

For 23 years, the vote for Cuba’s resolution had steadily increased while abstentions waned. But much had changed since the 2014 vote. Last Dec. 17, Cuba’s heroic state security agents known as the Cuban 5 flew out of U.S. prisons and returned to Cuba. Then, both President Raúl Castro and President Barack Obama expressed their intention to resume diplomatic relations broken by the U.S. in 1961.

Embassy flags were raised at former Interests Sections. Presidential handshakes and bilateral talks made news headlines. How would all parties react to the resolution this year?

The morning of Oct. 27 began with international organizations and alliances speaking in favor of Cuba’s resolution. Iran spoke for the Non-Aligned Movement, Ecuador for the Community of Latin American and Caribbean States, and South Africa for Group of 77 plus China. Sierra Leone spoke on behalf of the African Group. Kuwait for the Organization of Islamic Cooperation, Jamaica spoke for Caricom, Paraguay for MERCOSUR (Mercado Común del Sur) and finally Malaysia for ASEAN (Association of Southeast Asian Nations).

Then, country after country from every global region — except the European Union and North America — stressed how the extraterritorial reach of the U.S. blockade had a negative impact on international trade and increased climate change. They praised Cuba’s outstanding and selfless contribution to international health and education as they rejected the U.S.’s continued anti-Cuba measures.

Countries themselves blockaded and sanctioned by U.S. imperialism spoke for the resolution: Sudan, Zimbabwe and later the Democratic People’s Republic of Korea. The Bolivarian Republic of Venezuela denounced U.S. interference in the internal affairs of Venezuela and Cuba. The representative of the Plurinational State of Bolivia ended his remarks after highlighting the case of a seven-year-old Cuban girl whose life expectancy plunged from a 70 percent survival chance to 20 percent without cancer medication unavailable because of the U.S. blockade. This embargo is synonymous with death.

Next, Cuban Foreign Minister Bruno Rodríguez Parilla introduced the resolution acknowledging the positive steps achieved since Dec. 17. “But the measures adopted by the U.S. administration, which came into force on Jan. 16 this year and were later on expanded on Sept. 18, although positive, only modify, in a very limited way, some elements related to the implementation of the blockade.

“Many of them could not be implemented unless others are adopted that would finally allow Cuba to freely export and import products and services to and from the United States,” use U.S. dollars for international financial transactions and “have access to credits and financing from private entities and international financial institutions.

“The problem is not that the Cuban order hampers the implementation of these measures and therefore it needs to be modified in order to facilitate this process, as has been stated by some U.S. officials. The problem is the implacable and systematic existence of the blockade.

“The Cuban people will never renounce its sovereignty or the path that it has freely chosen to build a more just, efficient, prosperous and sustainable socialism. Neither will it give up in its quest for a more equitable and democratic international order.” (Full talk at tinyurl.com/o6ph87z.)

Exercising the opportunity to explain its vote before the actual count, Ambassador Ronald D. Godard, U.S. senior area advisor for Western Hemisphere Affairs, tried to fault Cuba for raising the annual resolution and made the usual unsubstantiated U.S. attack on Cuba for alleged human rights violations.

The representative of Nicaragua explained its vote supporting Cuba and criticizing the U.S. statement, saying that country “had hoped to hear something different this time. Regrettably we hear the same rhetoric of previous years. The same arrogance trying to justify what is unjustifiable, arguing for the continuity of a situation against the people of Cuba. … The entire world rejects this.” She also called for the Guantánamo prison to be closed and the land returned to Cuba, as did others.

About 12:30 p.m. the recorded vote was tallied visibly on an electronic board that turned totally green, except for two stark red “no” votes.

In after-vote explanations, Luxem­bourg, representing the European Union, cited the extraterritorial nature of the blockade and other matters for its unanimous vote against the U.S. ­blockade.