Tehran — From Oct. 27 to Oct. 29, a group of anti-racist activists from the United States came to the Islamic Republic of Iran for a conference on police brutality and racism. The conference was launched at the headquarters of the Islamic Republic’s broadcasting media corporation and hosted by famous Iranian filmmaker Nader Talebzadeh. After the first day, the conference continued at the Eteghlal Hotel, which was the Tehran Hilton before being nationalized after Iran’s 1979 revolution. 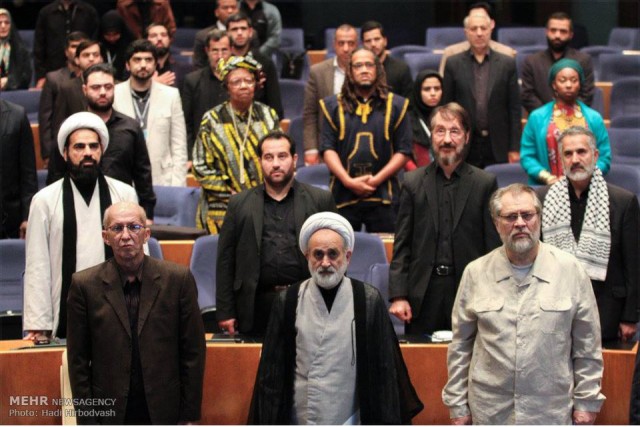 Political scientist and radio talk show host Dr. Wilmer Leon described the experience of African Americans in the United States, living with racism and repression on a daily basis. Minister Akbar Muhammed from the Nation of Islam also addressed the conference, as did Sultan Muhammed, an NOI minister from Chicago.

Kemi Seba, a Pan-Africanist essayist and media commentator from France, described the psychological impact of oppression on Black people in Western societies, saying that African Americans have been taught to hate themselves. Dr. Vernellia R. Randall, a law professor at the University of Dayton [Ohio], who manages the website racism.org, explained the school-to-prison pipeline and how racial injustice is perpetuated by U.S. law.

Pier Jules, a revolutionary leader of Cameroon who spent many years living in exile in the Soviet Union, called out capitalism. He charged that the imperialists and Zionists are fomenting chaos and terrorism around the world and called for global revolution.

Between the presentations of African-American guests, various Iranian intellectuals and clerics gave remarks. Often they quoted from Supreme Leader of Iran, Grand Ayatollah Ali Seyed Khamenei, who has said, “We oppose both the crimes of Daesh (ISIS) and the federal police of the United States. They are both the same.”

The conference was the third in a series of international gatherings called “New Horizon Conferences.” This year’s event was focused exclusively on the Black freedom struggle. The conference hall was decorated with images of Malcolm X, Kwame Nkrumah, Fred Hampton and other leaders of the Black Liberation struggle. The conference was presented by its hosts, who also included Zeina Mehanna and Iranian Press TV’s Marzieh Hashemi, as part of the Islamic Republic’s tradition of standing with the oppressed.