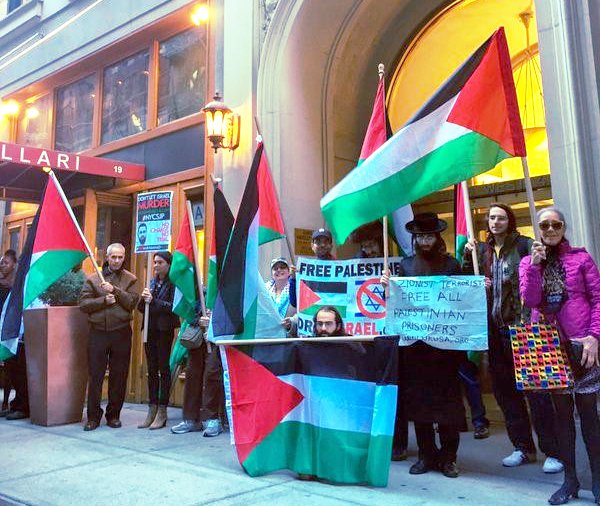 Demonstrators gathered in front of the G4S security company office on Manhattan’s 44th Street to “Stand with Ahmad Sa’adat, Georges Abdallah, and all Palestinian Prisoners.” Samidoun, the Palestinian Prisoner Solidarity Network, called the action as its contribution to the international week of solidarity with the two prisoners. Ahmad Sa’adat is the secretary-general of the Popular Front for the Liberation of Palestine, a Marxist-Leninist and pan-Arab Palestinian resistance organization; he is accused of involvement in the killing of a platoon commander of the “Israeli Defense Forces.”

Even Amnesty International, a liberal organization that supports so-called humanitarian interventions by U.S. imperialism, has declared that the detention of Ahmad Sa’adat is illegal because his trial was illegitimate.

Georges Abdallah is a Lebanese revolutionary who was found guilty of the assassination of a U.S. Army lieutenant colonel in Paris in 1982 and sentenced to life imprisonment. At the time, the U.S. military was occupying Lebanon in collaboration with Israel, which had invaded Lebanon. Georges Abdallah is currently held in a French prison.

The Oct. 23 protest targeted the security company G4S because of its direct connections with the Israeli state. Equipment from G4S is used in Israeli prisons — most likely in Ahmad Sa’adat’s prison — at military checkpoints and in Zionist settlements in the West Bank. At the protest were members of NYC Students for Justice in Palestine and members of Neturei Karta, Orthodox Jews United Against Zionism. On Oct. 30 Samidoun is calling another “protest to end Zionist political detentions and free all Palestinian prisoners” at 4 p.m. at the G4S office at 19 West 44th St. in Manhattan.