Elections in Haiti for a new president and Parliament are set for Oct. 25 — after a violence-plagued first-round vote for Parliament on Aug. 9.

Thousands of demonstrators have filled the streets to demand annulment of the low-turnout August elections, which the Miami Herald said were “marred by violence, fraud and late starts at polling stations across Haiti. Balloting at dozens of polling stations had to be suspended because of armed disruptions.” (Oct. 2)

As expected, the ruling party of Haitian President Michel Martelly and his allies dominated the fraudulent first-round results, achieved with a turnout estimated by the Miami Herald at 18 percent nationwide and less than 10 percent in the capital of Port-au-Prince.

Martelly, who is termed-out and cannot run in this election, has ruled by decree since January 2015 after refusing to hold elections for local offices or Parliament since 2011. Haitians have demonstrated repeatedly against the government’s repression and corruption. 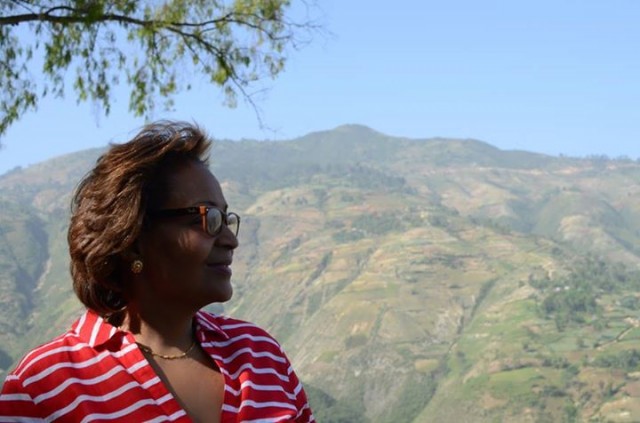 “The U.S. government, Martelly, and the Haitian elite hope to use this coming round of elections to put in their own handpicked government and declare that ‘democracy’ exists in Haiti,” said a statement issued by the Haiti Action Committee. “The Haitian grassroots majority, however, has other ideas. For the first time in 15 years, Fanmi Lavalas, the party of former President Jean-Bertrand Aristide and widely acknowledged as the most popular political movement in Haiti, is fielding candidates. Despite intimidation and terror, they are mobilizing the vote and fighting for a free and fair process.”

“Lavalas’s presence on the electoral scene is, in and of itself, a remarkable feat,” the HAC statement continued. “The intent of the two coups against President Aristide in 1991 and 2004 was to destroy Lavalas, the movement that has represented Haiti’s poor since the late 1980s. While President Aristide was in exile in South Africa from 2004-2011, U.S.-backed Haitian regimes carried out a classic counterinsurgency strategy designed to finish the job that the coup had started.

“U.N. forces and Haitian police violently attacked the Lavalas popular base in Cite Soleil and other communities, killing many. Thousands of political prisoners were arrested and held for years with no charges under horrendous conditions. Money was spread to divide and weaken the Lavalas infrastructure. Lovinsky Pierre-Antoine, a human rights advocate, Lavalas leader and candidate for Senate, was kidnapped and disappeared in 2007.”

On Sept. 30, the anniversary of the 1991 coup, Aristide made his first public speech since his return from forced exile in 2011, standing side by side with Dr. Maryse Narcisse, the Fanmi Lavalas candidate for president. Speaking in the street and surrounded by thousands of people, many of whom had walked miles to be there, he denounced the August elections as an “electoral coup d’etat” and urged people to get out the vote for Dr. Narcisse.

Dr. Narcisse, a medical doctor and long-time Lavalas militant, was setting up health clinics in rural communities at the time of the 1991 coup. Like many Aristide supporters, she went into the streets to protest the military and then was forced into hiding. After Aristide was re-elected in 2000, she joined his administration. Exiled after the 2004 coup, she returned in 2006 to help rebuild Lavalas and serve as Aristide’s spokesperson. If she wins, she would be the first elected woman president in Haiti’s history.

“The strength of Fanmi Lavalas, a party rooted in the poor majority of Haitians and their demands for a just society, is precisely the reason it is under such attack in this election,” stated the HAC. “Throughout this campaign, Lavalas supporters have been arrested, threatened, jailed, beaten and killed. Fraud and intimidation prevented many Fanmi Lavalas candidates from running in the Parliamentary races, and strong candidates were denied victories through rigged vote-counting.

“Haitians know all the tricks and terror the Martelly regime is using to prevent them from voting. … They are determined to exercise their legal rights, enshrined in the popular 1987 constitution, to publicly organize and promote a platform — one more front in Haiti’s struggle for independence, sovereignty, and liberation.”

A big factor in the elections is the U.S. government, which has funneled millions of dollars to influence the conduct and outcome of Haiti’s elections. Secretary of State John Kerry visited Haiti on a jawboning trip in early October, just as his predecessor Hillary Clinton intervened in past Haitian elections without regard to the sovereignty of Haiti. In addition, the elections are taking place under the shadow of the continuing U.S./U.N. military occupation of Haiti, which was put in place at the time of the U.S.-sponsored coup in 2004.