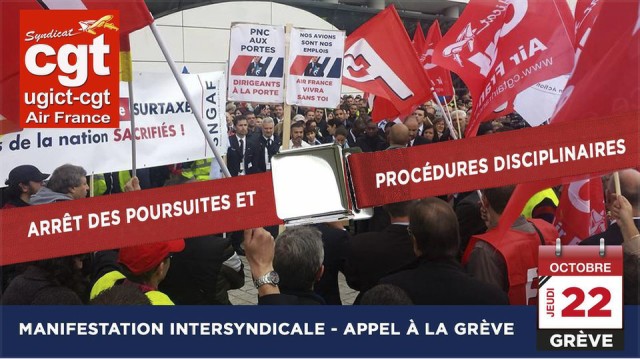 The pictures flashed around the world Oct. 5. Faced with angry workers who tore off their bosses’ white collars, top executives of Air France had to climb over a fence to escape.

The executives had planned to lay off 3,000 workers in a drive to impose austerity. French law requires a meeting of workers and management to discuss such a layoff.

The next day, French President François Hollande gave a national address calling the workers who took the strong action “thugs.” The workers are mainly members of the General Confederation of Labor (CGT) or of Workers’ Force (FO), which together have about a million members. Prime Minister Manuel Valls apologized to the executives.

A week later on Oct. 12, police arrested five employees of Air France at 6 a.m. in their homes on charges of violently interfering with the executives’ right to work. Lilia Mhissen, the CGT lawyer, in a statement on I-Tele said, “This arrest was totally disproportional. It is how bandits or terrorist are treated while in principle they could have been given a letter asking them to come to the police station.”

A few hours after the arrest the unions held a small demonstration in front of Air France headquarters at Charles de Gaulle Airport near Paris and a larger one in Metz, in northeastern France, where the minister of the economy was holding a meeting.

The CGT has called a strike for Oct. 22 to support the arrested workers and all those facing layoffs. On the union confederation’s Facebook page it tells the president, “You do not know the fear of losing your job; you are president; you do not know insecurity and misery” of the unemployed.

There, the CGT also satirizes the French media and its support for Air France and the heads of the French government, calling them the “real thugs” who are threatening French workers.