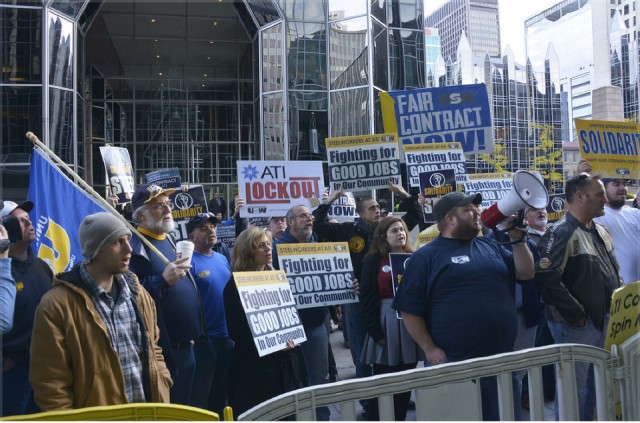 For two months, Allegheny Technologies Inc. has kept members of the United Steelworkers (USW) out on the picket line. Workers at 12 facilities in six states were locked out Aug. 15, despite the fact that the union was willing to keep members working while negotiations progressed. The tactic of starving the workers into submission to get them to cave in to ATI’s concessionary demands has not worked; the lines remain solid.

Dozens have responded to the union’s request to “nominate a picket line hero.” These “heroes,” nominated by their locked-out peers, are engaged in exemplary solidarity work in all the states — Pennsylvania, Ohio, Massachusetts, New York, Connecticut and Oregon — affected by the lockout. A typical nominee puts in long hours beyond her/his assigned picket shift, volunteers in the strike kitchen every day, and/or drives all over town asking local businesses to put strike support signs in their windows.

Todd Barbiaux of Local 1196 in Brackenridge, Penn., is one such hero. “He coordinated Local 1196’s Blue Tuesday event and has helped out with just about every other action throughout the dispute. He’s been on the line and at the hall every single day since the lockout started and he’s even converted his car into the USW Pace Car, complete with racing stripes, to be used to run errands to the picket lines.” (usw.org) That is the kind of strength this union-busting company is up against.

From the strike communities to halfway around the world, support for the workers is growing. In Oregon locked-out workers “took to the streets of North Albany to thank the community for all of the support it has provided throughout the lockout.” (usw.org) In Brackenridge, Local 1196 thanked the local community with a picnic. The New Bedford, Mass., City Council passed a resolution supporting the locked-out Steelworkers. ATI workers in Stalowa Wola, Poland, held a solidarity demonstration.

The USW took on answering the company’s propaganda in the first week of October with a full-page ad in Pennsylvania newspapers. It answered an ad put in by the company to “celebrate the hard work and dedication of all our employees over the decades,” in particular salaried personnel, for their “commitment, persistence and ingenuity” in scabbing on the union workers.

“In fact,” the USW pointed out, “active and retired salaried workers have had their benefits cut and 40 percent of them face layoffs. By contrast, ATI’s top executives rewarded themselves with millions in compensation increases.

“ATI’s top executives should know better than to try to sell this fairytale,” the ad concluded. “ATI must understand that there will be no happy ending without a fair contract and an end to the lockout.” (usw.org)

Thousands have signed petitions demanding ATI end the lockout. These petitions will be delivered to corporate headquarters on Oct. 20. To sign the petition, go to tinyurl.com/ATIpetition.