What the system calls looting — maybe grabbing some groceries or a winter coat from a store during a rebellion — can land a person in jail. Looting by the banksters and their servile attorneys is another story. Try stealing a museum, a city park, a water department and the earned pensions of city workers. In Detroit you’ll be the toast of the town, although you might have to run a gauntlet of protesters.

On Oct. 13 more than 100 Detroiters, including a large contingent of city retirees, picketed outside the Detroit Institute of Arts. Inside, the city’s elite were celebrating the opening of an office of the Jones Day corporate law firm in Detroit. 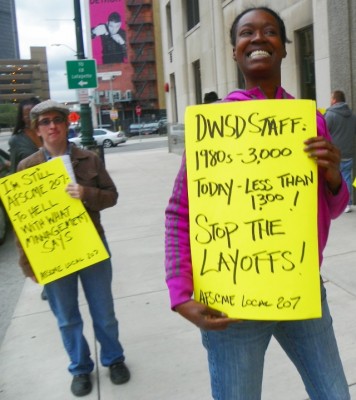 Jones Day was hired by the firm’s own employee, governor-appointed Emergency Manager Kevyn Orr, to “represent” Detroit in federal bankruptcy court. What Orr and Jones Day did, in collusion with Bankruptcy Judge Steven Rhodes, was to construct a “Grand Bargain” to loot pensions and steal city assets. The deal imposed drastic pension cuts on city retirees and cancelled their health insurance, gave the city-owned Detroit Institute of Arts to a consortium of “philanthropists,” and turned the treasured Belle Isle city park into a state park requiring an entrance fee.

At Orr’s initiative, Detroit Water and Sewerage Department shut off service to tens of thousands of Detroiters. DWSD is slated to be sold to a suburban-dominated regional water authority and potentially privatized — possibly by the Veolia Corp., which already has a consultancy contract with the new water authority.

Jones Day was paid $53 million in fees from the city treasury for a year of aiding and abetting the corporate looters. Meanwhile, Detroiters are still on the hook for hundreds of millions of dollars in interest payments to some of the world’s biggest banks, the result of fraudulent interest-rate swap deals.

The protesters put up a picket line that occupied the turnaround used for dropping people off and valet parking. As a result, valets under police protection had to greet gala attendees at the curb and escort them through a gauntlet of protesters, who loudly confronted each of the millionaires with chants of “Shame” and “Looters, liars, and thieves.” The loudest voices were those of retirees. Protesters swarmed the easily recognizable Orr, following him until he was whisked inside.

The DIA is home to famous auto industry murals painted by the revolutionary Mexican artist Diego Rivera. One of the chants was, “What would Diego Rivera do? Tell Jones Day, the hell with you.”

The protest was called by Moratorium Now! Coalition to Stop Foreclosures, Evictions and Utility Shutoffs.