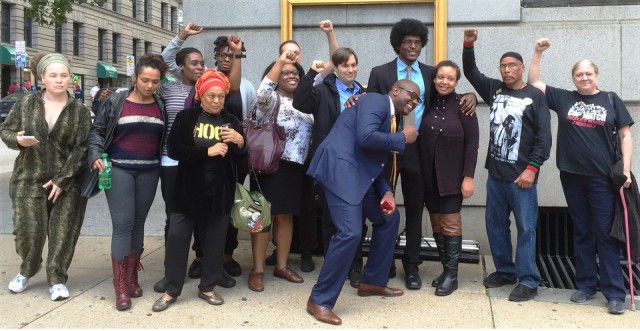 After just 30 minutes of deliberations following a two-day trial, on Oct. 13 a Baltimore jury found Alkebu-Lan Marcus not guilty.

Marcus was one of hundreds of protesters arrested after the Baltimore police killing of Freddie Gray. He had joined thousands of youth in Baltimore in taking over the streets — an uprising that was only quelled through the use of thousands of city cops, state troopers and National Guard soldiers. The fact that Gray was the 353rd person killed by cops in 2015 in the U.S. was a major factor in the two-week-long rebellion. (killedbypolice.net)

Marcus was charged with “failure to obey a lawful order” and “interfering with an arrest” during mass protests on April 25. The arrest took place when a police squad rushed onto a crowded sidewalk to arrest Morgan Malachi. Marcus was arrested when he and others tried to pull Malachi out of police hands. 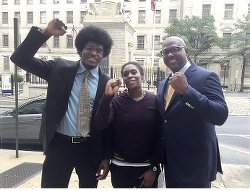 Marcus and Morgan Malachi were both part of a “Philly Is Baltimore” contingent. Malachi was eventually charged with disorderly conduct and “refusal to obey a lawful order.” Video of their arrests clearly shows all she was doing was speaking into a bullhorn. There was no cause for an arrest and she was finally acquitted at the end of her trial on July 23.

He said there was no evidence of an order to disperse, despite prosecution claims. “No one heard it. It was like a dog whistle that only police heard.”

Gordon also pointed out: “You have the right to resist an unlawful arrest. A person who comes to the aid of someone who is unlawfully being arrested — you have that right as well.”

Members of the Philly Coalition for Racial, Economic and Legal Justice, the Philadelphia Trayvon Martin Organizing Committee and the Baltimore Peoples Power Assembly rallied with signs outside the courthouse during the court proceedings and made sure the courtroom was packed with supporters.

The epidemic of police killings that motivated the protests in Baltimore; Philadelphia; New York; Cleveland; Ferguson, Mo.; Oakland, Calif.; and many other cities continues. As of Oct. 12, the death count of men, women and children, including trans people, who have perished as a result of confrontations with cops in 2015 is 923.