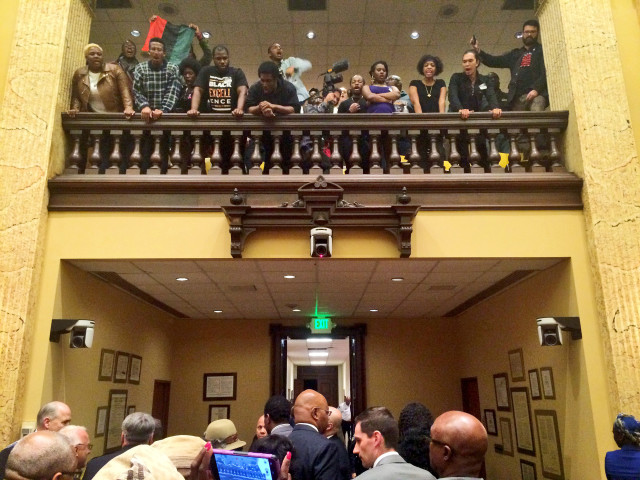 Youth and high school students from City Bloc and their supporters held an occupation of City Council chambers on Oct. 14, after demanding a meeting with Baltimore Interim Police Commissioner Kevin Davis and Mayor Stephanie Rawlings-Blake. Some 32 people participated in the occupation in response to a City Council committee’s approval of Davis’s permanent appointment. City Bloc is a group of students from a college prep high school at Baltimore City College.

A large turnout came to the hearing to express disapproval with the appointment of Davis, whose salary will be $200,000 a year. Students and their supporters disrupted the hearing several times, chanting, “No justice, no peace! Stop the vote! Stop the vote!” and “If we don’t get it, shut it down!” Many who attended the hearing spoke and testified that the proceedings were nothing but a “dog and pony show.”

The Rev. Cortly CD Witherspoon, president of the Baltimore chapter of the Southern Christian Leadership Conference, referred to the hearing as a “coronation” and testified that the police commissioner should be elected by the people of Baltimore, not appointed. He called for community control of the police, which would require officers to live in the neighborhoods that they patrol, and an elected civilian review board with the power to criminally charge officers and fire them. It was revealed at the hearing that only 21 percent of Baltimore police officers live in the city.

When the council committee began voting, protesters with the Baltimore Uprising coalition demanded that the voting be halted and that Davis and Rawlings-Blake meet with them. The newly formed coalition consists of City Bloc, Baltimore Bloc, The West Coalition and Leaders of a Beautiful Struggle.

Prior to the hearing the coalition had issued a letter with 19 demands on how the police should interact with protesters. They called for a ban on military-style policing, including the use of armored vehicles and rubber bullets, and for “riot gear” to be used only as a last resort to protect officers’ safety. In addition, they demanded that police officers wear badges and name tags at all times.

The demands are very moderate, but the fact that mostly high school students decided to occupy City Hall is extremely significant and showed that there is militancy within the youth of Baltimore. They should be praised for their courage.

After the vote 32 people refused to leave City Hall until the mayor or commissioner met with them. In an early morning telephone interview with teleSUR on Oct. 15, City Bloc activist Makayla Gilliam-Price said that police were turning off power outlets to prevent protesters from charging their phones, cameras and other electronic equipment. She said the police had not granted them access to the restrooms and they had limited water and food.

“They are currently forcing us to choose between our survival and our political beliefs,” she said.

At around 3:15 a.m., police gave an ultimatum that they would start arresting people. Twelve people decided to defy the ultimatum and risk arrest. At 4:45 a.m., police moved on the building and arrested the remaining 12 occupiers. The age range of those arrested was 16 to 38, three being juveniles.

Those inside City Hall had put out a call for folks to come and stand in solidarity with them while they faced arrest. The Baltimore Peoples Power Assembly immediately mobilized a delegation to City Hall, which arrived at 11 p.m. to support the students.

One of the arrestees, ShaiVaughn Crawley, said: “Early Thursday morning on Oct. 15, 2015, I was arrested with some pretty inspiring protesters for ‘refusing to leave a public building,’ which would later be translated to trespassing. The motives were pretty simple: The youth of Baltimore City have not ever had a voice in anything that this city pursues and these teenagers have been tired of it for a very long time. I remember even living in South Carolina how bad the school system was, and is, and to see that very same practice echoed [times] 100 here in Baltimore is pretty devastating. We knew we had to do something.”