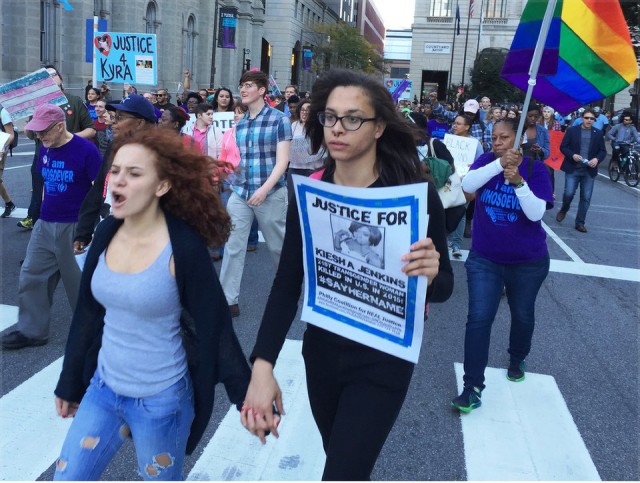 Hundreds of people gathered at Thomas Paine Plaza on Oct. 10 for Philadelphia’s fifth annual Trans* March [“trans*” is a word currently used with an asterisk to indicate the spectrum of all the different genders of people who do not conform to the either/or of male/female — WW]. The rally across from City Hall was followed by a march through city streets that received broad and very positive support, with several people honking car horns or joining along the route.

Popular chants heard along the march included “Hey, hey! Ho, ho! Transphobia’s got to go!” and “What do we want? Justice! When do we want it? Now!”

Organizers of Philadelphia’s Trans* March called the event a “revolutionary movement … accepting to people of all gender identities, expressions and experiences.”

Evident in this year’s demonstration was the influence of the Black Lives Matter movement that arose in response to the murder of Michael Brown by police in Ferguson, Mo., in 2014. BLM has forcefully pointed out that the brutal, racist murders of people of color happen across a range of gender identity. Several signs carried the message that “Black Trans Lives Matter.”

The event took on particular significance in the wake of the murder of 22-year-old Kiesha Jenkins, a Black transgender woman. Jenkins was on her way home early in the morning of Oct. 6, when she was brutally beaten by five or six men, and then shot twice in the back as she lay on the ground. While Philadelphia police are trying to portray this as a “robbery gone wrong,” the Jenkins family insists it was a hate crime. Members of her family joined in the demonstration.

The Philadelphia Coalition for Racial, Economic and Legal Justice, which participated in the march, brought signs demanding justice for Jenkins. REAL Justice organizer Erica Mines, speaking at the concluding rally after the march, read the names of transgendered individuals killed as the crowd responded, “Say their name,” after each one.

Rally organizer Deja Alvarez noted: “This community does not face disproportionate poverty, violence, death by suicide and murder only when one of us makes the news. We face these threats 24 hours a day, seven days a week, 365 days a year.” (Philly.com, Oct. 11)