Workers World stands in solidarity with the hundreds of thousands of people who have demonstrated in Tokyo since late August to protest plans by current Prime Minister Shinzo Abe to change Japan’s Constitution to allow aggressive deployment of the well-trained and technologically advanced Japanese military.

The Japanese ruling class wants to increase its military flexibility for its own imperialist interests. At the present moment, however, U.S. imperialism fully supports and encourages this expansion of the Japanese armed forces. Washington wants Tokyo as a subservient force in Asia aimed especially against socialist North Korea and People’s China. 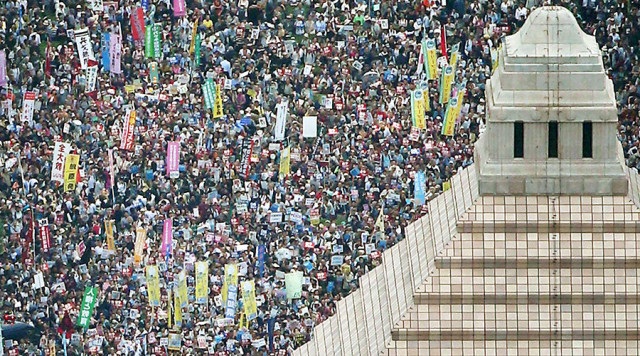 The Japanese workers and masses in general, while chafing under the U.S. occupation, welcome restrictions on Japanese militarism. The massive demonstrations in Japan starting Aug. 30 — which called Abe “Public Enemy” — illustrate this attitude. (Deutsche Welle, Sept. 4)

The peoples of other nations in the Pacific region hate Japanese imperialism just as they hate U.S. imperialism. Korea, north and south, was a Japanese colony from 1910 to 1945. Parts of China were also conquered during that period and the Japanese Imperial Army carried out mass atrocities there and during shorter periods in the Philippines, Indonesia and Southeast Asia. Abe still honors the emperor and refuses to acknowledge forcing young women from Korea and other Asian countries into sexual slavery to the conquering Japanese army.

Workers World stands with the people and workers of Asia and the Pacific, including Japan itself, in opposing Abe’s militarist initiatives just as we oppose all threats to the region from Washington and the Pentagon.