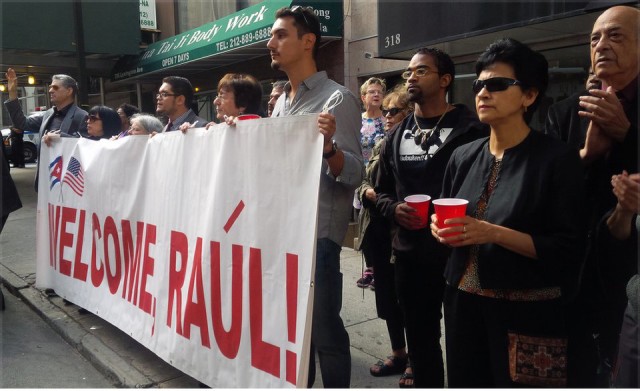 On his first visit to the United States, Cuban President Raúl Castro’s full schedule at the United Nations General Assembly included speeches in forums on “Development Goals After 2015,” as well as “Gender Equality and Women’s Empowerment.” Castro was also present at a joyous reception at Cuba’s New York Mission to the U.N. on Sept. 27, where for hours he warmly greeted Cuba’s many friends.

On Sept. 26 in the U.N. discussion on development goals, President Castro said:

“The re-establishment of diplomatic relations between Cuba and the United States of America, the opening of embassies and the policy changes announced by President Barack Obama with regard to our country constitute major progress, which has elicited the broadest support of the international community.

“However, the economic, commercial and financial blockade against Cuba persists, bringing damages and hardships on the Cuban people, and standing as the main obstacle to our country’s economic development, while affecting other nations due to its extraterritorial scope, and hurting the interests of American citizens and companies. Such policy is rejected by 188 United Nations member states that demand its removal.

“Nevertheless, Cuba fulfilled the millennium development goals and offered its modest cooperation to other developing nations in various areas, something we shall continue to do to the extent of our limited capabilities.

“We shall never renounce honor, human solidarity and social justice, for these convictions are deeply rooted in our socialist society.”

Castro pointed out that 15 years after the millennium goals were adopted, progress was “insufficient and unevenly distributed.” The goals included cutting in half extreme poverty rates, halting the spread of HIV/AIDS and providing universal primary education. Castro said: “Unacceptable levels of poverty and social inequality persist and worsen, even in the industrialized countries themselves. The gap between North and South and the polarization of wealth increase.

“Amid the existing economic and financial crisis, wealthy individuals and transnational companies are growing richer while the number of poor, unemployed and homeless people increases dramatically as a result of the harsh so-called ‘austerity’ policies, and waves of desperate immigrants arrive in Europe escaping misery and conflicts that others have unleashed. …

“The lack of resources cannot be used as a pretext when annual military expenses amount to 1.7 trillion dollars; absent a reduction of such expenses, neither development nor a stable and lasting peace will be possible.”

Speaking again the next day, President Castro said, “Seventy years after the establishment of the United Nations Organization, one of whose foundational objectives was the struggle on inequality, discrimination against women stands as an embarrassing reality.”

After citing the excellent participation and leadership of women in Cuban society, Castro closed saying: “We admit that some achievements have been scored in the past decades but they are fragile and insufficient. In order to advance toward the full realization of gender equality and the empowerment of women, it is necessary above all to have a more equitable and just international order that eradicates poverty and hunger, puts an end to conflicts, favors human beings above capital and preserves the environment. But, political will is much needed to avoid turning the results obtained so far into our goals, instead of making them a starting point and a pledge to achieve true equality for women.”

The U.N. General Assembly will vote on a resolution against the U.S. blockade in late October or early November. Kenia Serrano, the president of Cuba’s Institute for Friendship with the Peoples, and North American Department representative Leima Martínez will visit New York, Washington, D.C., and northern California from Nov. 3 to Nov. 17.

Look for these opportunities to amplify the demand to end the U.S. blockade of Cuba and to stop the U.S. destabilization campaigns in Venezuela, Ecuador, and throughout Latin America and the Caribbean.