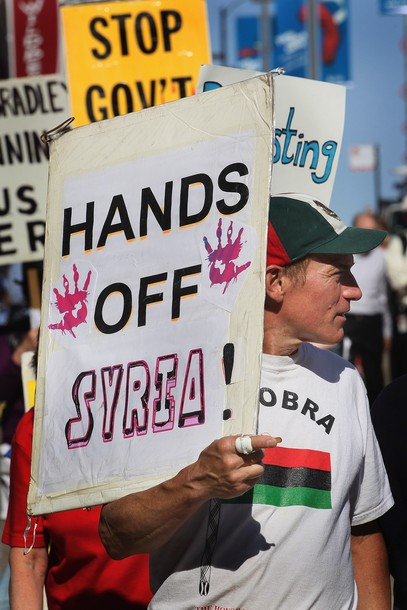 War criminal and former top general, David Petraeus, testified before Congress on Sept. 22, recommending that the U.S. military should establish so-called safe havens in Syria, “protected” by U.S. bombers and fighters, as well as sending advisors and support troops.  He also recommended that the U.S. threaten to attack the Syrian government’s air force and airfields.

Petraeus said that these moves are needed to counter the Russian government’s recent measures backing the Syrian government, which has been the target of imperialist intervention and of the Islamic State.  That conflict has cost hundreds of thousands of Syrian lives and has driven millions from their homes.  Petraeus said that U.S. imperialism must vie with both Iran and Russia in Syria, whatever the cost to the people there.

“Russia’s recent military escalation in Syria is a further reminder that when the U.S. does not take the initiative, others will fill the vacuum — often in ways that are harmful to our interests,” he said. (New York Times, Sept. 23)

Yes, ex-general, ex-CIA Director Petraeus is indeed a convicted felon.  He pleaded guilty in April this year to giving classified information to his biographer.  But unlike hero whistleblowers Chelsea Manning — sentenced to decades in prison for exposing U.S. war crimes in Iraq — and Edward Snowden — forced into exile for exposing how U.S. agencies spy on everyone — Petraeus was let off with a fine and probation.

“Senators, generals, ambassadors, former British Prime Minister Tony Blair and the owner of The Atlantic were in the roster of powerful voices who wrote the federal judge to ask him to go easy on Petraeus.  The list includes former Connecticut Sen. Joe Lieberman, South Carolina Sen. Lindsay Graham and Adm. Michael Mullen, the former chairman of the Joint Chiefs of Staff. ‘Dave is also humanly flawed, as many are, for which he has paid a steep price both personally and professionally,’ Mullen said.” (infowars.com, June 10)

That “steep price” does not include Wall Street’s rich rewards to Petraeus, who was named chair of the Kohlberg Kravis Roberts hedge fund’s KKR Global Institute. Nor does it include lucrative positions at City University of New York, at the University of Southern California and at Harvard.

Under the George W. Bush administration, Petraeus commanded the 101st Airborne Division in the U.S. invasion of Iraq in 2003.  In 2007, he became the commanding general of the Multi-National Force-Iraq. He implemented the infamous “surge,” a big escalation in the U.S. war in Iraq against Iraqi resistance to the occupation. He also oversaw the torture programs at U.S. military prisons in Iraq.

Under Obama, Petraeus became commander of the U.S. Central Command, responsible for overseeing wars throughout the Middle East and Central Asia, including Syria, Iraq and Pakistan.  In 2011, he was named head of the CIA, a position he held until the scandal broke in late 2012.

Even following his conviction, Petraeus remains the darling of the militarist politicians and the Pentagon general staff.  His “advice” to Congress comes on the heel of reports that the U.S military’s so-called “moderate” training program in Syria, costing at least $500 million, has been an abysmal failure.  Just 70 Syrians have gone through this program, which was designed to oust President Bashar al-Assad and replace him with someone “friendly” to the U.S.

So now Petraeus is calling for direct U.S. military intervention in Syria, for more war, for more suffering and misery to enrich the coffers of U.S. oil companies and banks, to maintain U.S. imperialism’s grip on that region.

Hands off Syria! U.S. out of the Middle East!