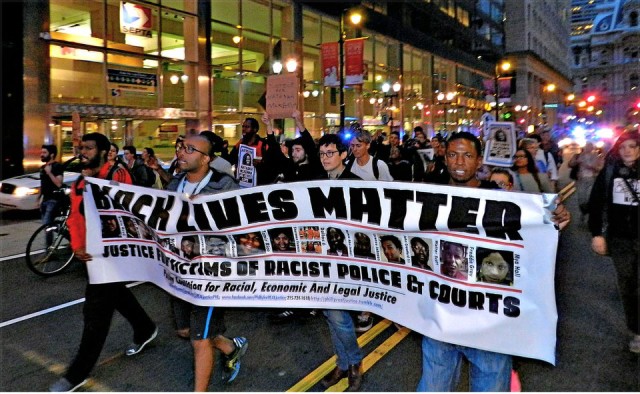 Sept. 21 — As Philadelphia is gradually being militarized by Homeland Security and the Secret Service in advance of the visit of Pope Francis on Sept. 26 and 27, members and supporters of the Racial, Economic and Legal Justice (REAL Justice) Coalition defied the lockdown, taking to the streets of Center City to protest the violent murder and torture of Natasha McKenna by Fairfax County, Va., police in early February 2015.

McKenna, a 37-year-old, African-American woman diagnosed with schizophrenia as a child, was arrested and placed in police custody after allegedly threatening a police officer.  A 48-minute video released earlier in September shows several male officers in hazmat [hazardous material] uniforms manhandling McKenna, who is naked, repeatedly telling her to “stop struggling” even though she obviously is not, and eventually shooting her multiple times with a taser gun.  McKenna died as a result of this abuse. Her last words, heard on the video, were, “You promised you wouldn’t kill me.”

Demonstrators included several spokespeople from the disabled community, a community that accounts for nearly 50 percent of victims of police brutality.  Following the short rally, over 100 demonstrators marched to Love Park. There, a day earlier, members of the REAL Justice Coalition had joined homeless people to protest the city’s lack of plans to house and feed people who will be displaced by the shutdown leading up to the pope’s visit.  Demonstrators took over the stage just outside the Visitors Center, welcoming women of color present to join them on the platform.

Demonstrators then marched up Benjamin Franklin Parkway toward the Homeland Security lockdown area. But suddenly, in what organizers described as a “remix,” they did a quick reversal and turned back into Center City.  They marched against traffic on several streets, did sudden turns and totally confused the unwanted police escort that struggled to keep up.  Marchers took over both lanes of traffic on Broad Street and Market Street, getting broad support from people waiting for buses.  A popular chant was “Wake up, wake up! We want our freedom, freedom!  Tell these racist-ass cops, we don’t need ’em, need ’em!”

The protest ended back on Market Street with the unfurling of a 150-foot scroll with the names of over 75 women of color and transgender individuals murdered by police.