Shannon and Carmen Wampler-Collins, a lesbian couple for 20 committed years, with two children, fought to exercise their right to same-sex marriage on Sept. 14 in Morehead, Ky. That day, Rowan County Clerk Kim Davis returned to work after being jailed for defying the recent U.S. Supreme Court decision legalizing same-sex marriage. Davis had refused licenses to same-sex couples, including the Wampler-Collinses. Minnie Bruce Pratt of Workers World interviewed Shannon about the couple’s struggle and resistance. 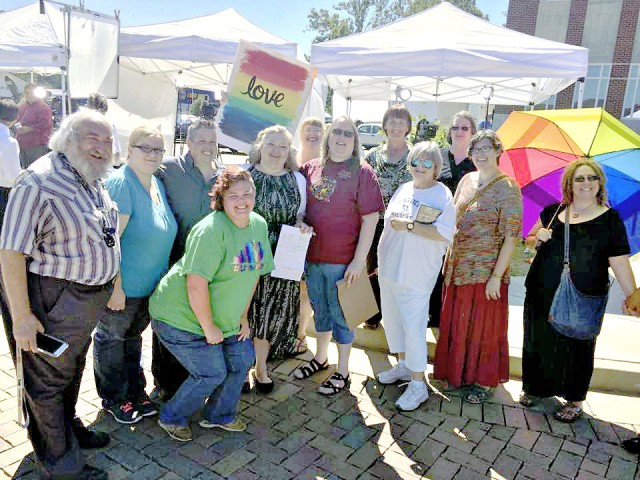 WW: You and Carmen met in 1989 and had a commitment ceremony in 1995. Tell us a little about yourselves and how you met.

Shannon: Nowadays, I’m a chef. I went to culinary school in 2010, and I’m cooking in a restaurant — usually a man’s world and work! Carmen works with nonprofits as a grant writer and consultant.

We met while we were both working the counter at Bart’s Ice Cream in Northampton, Massachusetts. She was a “Smithie” going to Smith College, and I was a “townie,” where growing up we felt overpowered by Smith: “Those rich kids coming here.” But Carmen was not. She comes from a poor background.

We had the same sense of humor. We just hit it off and the connection just bloomed. We got together as a couple on my grandmother’s birthday. We were in love then, and we still are now.

Shannon: There’s still contention over the license we received. The ACLU is investigating. Kim Davis crossed off her name as county clerk and wrote in “pursuant to federal order” and changed Rowan County to the name of the town — Morehead. We definitely feel we got the license as second-class citizens. Carmen was born and raised in Rowan County!

We are waiting to hear more to have the ceremony, hopefully within the 30-day time limit on the license. We’d planned something small — justice of the peace, lunch out. But the boys protested we’d had one wedding without them and are demanding something big. So we said, “If you want a wedding, you can plan the wedding!” They’re 16 and 11. They are activist children.

WW: You’ve said you two were married by your own ceremony long before the Supreme Court decision, but you want “legal protection” for your family.

Shannon: In Massachusetts, there’s co-parent adoption, but not in Kentucky. I adopted our younger son as a single mother. My sister carried him — and Carmen carried our older son.

We’ve raised both boys together as a family. But in Kentucky, I have no legal relation to our older son — who is my child too — if something happens. And Carmen wouldn’t have any to our younger son, who is also her child.

Carmen had a serious medical condition a couple of years ago, so the possibility is real and so scary.

WW: Would you describe getting into the County Clerk’s office on Monday?

Shannon: We live in Lexington now, an hour’s drive from Morehead. When we got to the courthouse, it was surreal. Bigots had come from wherever they got them from, and were lined up in trucks along the street, using loudspeakers to shout ugly things.

Our people were right there, the Rowan County Rights Coalition. They gathered around us in a circle. They got us through the haters on the outskirts who lined the route and were actually inside the courthouse.

Then we went up to the counter, and Brian [Mason] was hilarious. He said, “I’ve been waiting for you two!” [Mason is the deputy clerk openly in favor of issuing same-sex marriage licenses—WW.]

As we were going out, one woman got in my face shouting, “Sex between two women is wrong!” I just want to fight with these people. I get so angry. So I said, “You must not be doing it right!”

WW: The people who got you safely into the courthouse — who were they?

Shannon: That’s the Rowan County Rights Coalition. One of the forefront leaders was best friends with Carmen’s aunt and mom, part of the family when Carmen was growing up. That woman is an activist extreme. She’s been involved in protest since the 60s and has worked with union organizers.

The coalition is outraged people, straight couples, gay couples, people who are trans* and bi, people from Morehead State, new people who’ve moved to the county and some who have grown up there. [“Trans*” is a word currently used, with the asterisk, to indicate the spectrum of all the different genders of people who do not conform to the either/or of male/female.—WW]

We have a trans* couple Kim Davis actually signed a license for. One member of the couple identifies as male, but his birth certificate still lists female. Kim Davis looked at the two of them, saw male and female, and just assumed. People make all kinds of assumptions.

The coalition has rallied in front of the courthouse throughout. We had one side of the courthouse lawn. The opposition had the other. First, we were flashing peace signs and blowing kisses, and then we started chanting: “Gay or straight! Black or white! Marriage is a civil right!”

WW: Right-wing, gun-toting “Oath Keepers” threatened to show up to “defend” Kim Davis. What’s the sentiment of the local community?

Shannon: Protest here is a lot more personal. Families are facing off against each other on both sides of the issue.

Rowan County is a small, quiet, tight-knit, keep-to-yourself place. Things go on as they have gone. While there are progressive people, it‘s not a place where people rock the boat. People have conflicts, but they don’t like to talk about them.

This struggle opened up what has been bubbling underneath. There are gay and lesbian people living here. Until this, they kept it to themselves, lived in the closet, or maybe they were out but not loud about it. The progressives have not had a unified voice until now. This is making a difference. This isn’t just a small, isolated town. There are progressives here as well as fundamentalists.

WW: There’s a 30 percent poverty rate in Rowan County. On Facebook one of your local supporters said she saw a right-wing “Sodomy Is a National Sin” sign and wanted to replace it with “Poverty is a National Sin.”

Shannon: Poverty is a huge issue here. This used to be a big tobacco area. Lumber mills are a big industry. The hospital and Morehead State University are big employers.

For those with less education, Guardian Auto Glass, that’s considered a big, high-paying job starting around ten dollars an hour. Otherwise, it’s Walmart, Kroger, lower-paying, service jobs, no insurance. Some people drive half an hour to Mount Sterling, where there’re more factory jobs. But they’re living in poverty, paying for gas to commute.

It‘s not a huge place, but it‘s bigger than a lot of towns in the area. It’s an important regional center in the surrounding rural Appalachian area.

We are trying to bring the good to it. Now, we’ve met these people. There’s promise. There’s good here that I haven’t seen before.

We have a niece, 19 years old. She lives in Morehead and may live there forever. We want to make a better place for her.