Educators, staff members, students and community members “walked-in” at 105 Milwaukee Public Schools on Sept. 18. This action was organized by the Milwaukee Teachers Education Association and Schools and Communities United, with support from dozens of labor-community organizations. 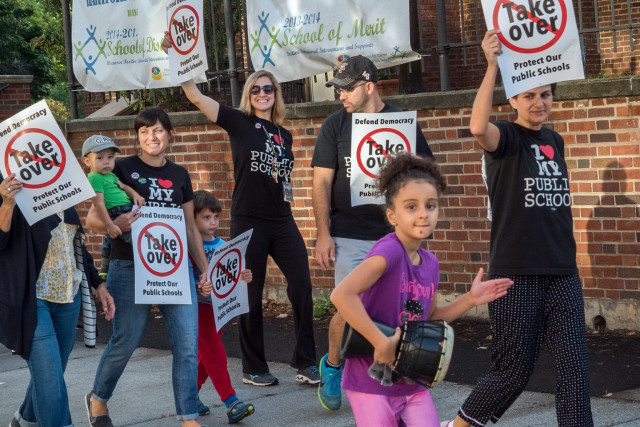 Participants held rallies, informational picket lines and other events before the start of the school day and before they “walked-in” to their respective schools. Thousands across the city demanded an end to Wall Street attacks on public education.

Over the past few years the right-wing-controlled Wisconsin Legislature has rammed through the greatest austerity cutbacks in the history of the state in public education — both K-12 and higher education. Milwaukee, the largest city in the state with a majority Black and Brown population, has for decades been the target of Wall Street forces. In particular, the banks, with the implementation of failing charter schools, have taken hundreds of millions of dollars from public education.

In the latest 2015-17 state budget passed by these reactionary legislators and signed into law in July by their crony, Gov. Scott Walker, even more draconian Wall Street austerity is planned. This includes the possible mass expansion of charter schools in K-12 education, as well as the reduction of shared governance and elimination of tenure for the University of Wisconsin system by state statute.

A provision in this budget is widely known as the “Milwaukee plan,” which is modeled on previous plans in Detroit, Philadelphia and New Orleans. The privatizers’ goal is to take over so-called “failing” schools in the Milwaukee Public School system and hand them over to private corporations to operate.

Current state law says that an “Opportunity Schools Partnership Program” commissioner is to be appointed by Milwaukee County Executive Chris Abele, a Democrat and major venture capitalist and realtor. The commissioner would have parallel authority with the elected Milwaukee Public School Board and would be accountable only to the county executive.

The 55 schools listed as potential targets have predominantly Black or Latino/a student populations and are in areas of the city devastated by decades of de-industrialization and lack of social safety net programs.

All Milwaukee Public School workers employed at the “targeted” schools would be fired and forced to reapply for their jobs. They would have to waive their right to union representation in order to be considered for rehire.

Wall Street forces aim to begin the process with three schools this fall and then five schools every year thereafter.

Led by the MTEA, resisistance has been in motion for months to shut down the Milwaukee plan. The fightback is ongoing, with the Sept. 18 actions the high point thus far.