Sept. 20 — S. Baxter Jones continues to fight to regain his home, which he lost through foreclosure in Jackson, Mich., in 2011.

On July 28, a judge stayed an eviction order sought by Fannie Mae to allow Jones an opportunity to take advantage of a recently announced Federal Housing Finance Administration and Fannie Mae Buyback Program allowing Michigan homeowners to repurchase their foreclosed homes at market value. Fannie Mae defied the judge’s intent, refused to sell the home to Jones and, without notice, sold it to an investor. This is the same Fannie Mae that was taken over and bailed out by taxpayers to the tune of $116 billion since 2008.

In response, Jones began a hunger strike on Sept. 13 to demand the return of his home at market value. 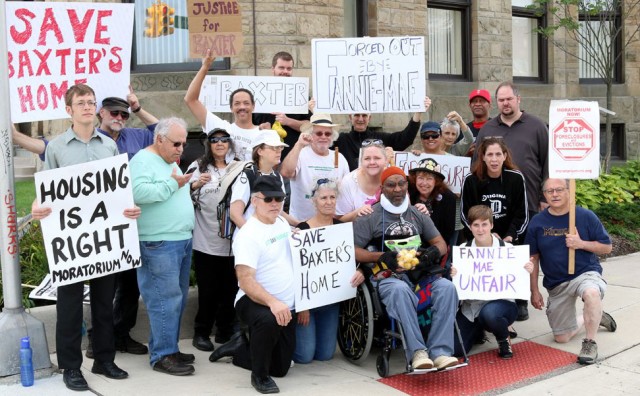 Jones, a Detroit public school teacher for 22 years and a former track coach, suffered traumatic brain injury in 2005 as a result of an automobile accident and now has severe disabilities. He was forced to return to work prematurely with an undiagnosed traumatic brain and spinal cord injury. In 2010, the injury was finally diagnosed, and that April Jones received a family medical leave approved by Detroit Public Schools. Then during summer break he was unjustly fired by DPS, which was then under the control of unelected Emergency Financial Manager Robert Bobb, because Jones could no longer fulfill his work-related education and recertification requirements!

In violation of federal regulations, Wells Fargo, the loan servicer for Fannie Mae, refused to grant a forbearance or a loan modification for Jones while he was obtaining disability benefits. Instead, Wells Fargo sold his home at a sheriff’s sale in June 2011 and transferred ownership to Fannie Mae in August 2011. In 2013, Jones’ offer to purchase his home at market value was turned down by Fannie Mae.

In a press release announcing commencement of the hunger strike, Jones stated, “I feel disenfranchised, constantly jumping through hoops of fire and being burned. I paid all that money and I have nothing to show for it. Federal housing authorities have stonewalled me at every turn. I can no longer accept this injustice. I do not want this to happen to another person, so despite my health issues, as a Godly man, I have decided to engage in a hunger strike for justice.”

In an interview this week, Jones stated, “I am not on a hunger strike just to regain my home. I want to highlight the injustices facing thousands of struggling individuals and families today, suffering inhumane water shutoffs, continuing tax and bank foreclosures, declining schools, high unemployment, low pay, and vicious assaults by the police.”

Support for Jones is growing. A number of activists have announced that they will begin fasting in solidarity. For updates, visit the Facebook page “HUNGER STRIKE — Help Baxter get his Home Back.”

You can support Jones by calling Katrina Jones (no relation) of Fannie Mae at 215-575-1400 or email [email protected] Demand that Fannie allow S. Baxter Jones to reclaim his home under the FHFA Buyback Program. The home address is 8789 Rexford Rd., Jackson, MI 49201. Please refer to FHFA file #H-15-1408.