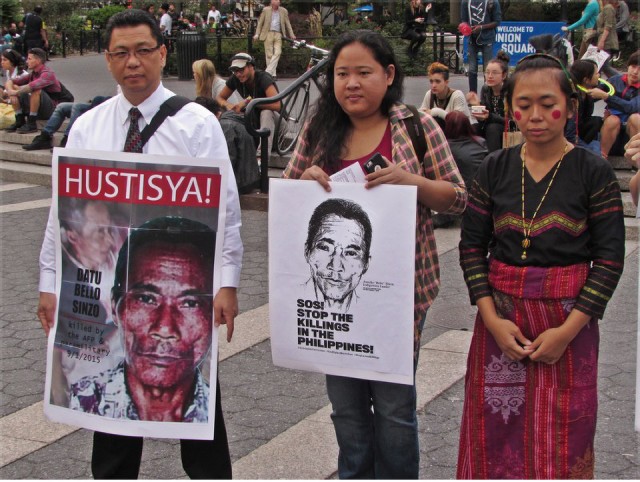 The New York Committee for Human Rights in the Philippines held a vigil in New York’s Union Square on Sept. 21 to honor three people executed by paramilitaries in Mindanao, in the southern Philippines.

Emerito Samarca, founder of the Alternative Learning Center for Agricultural and Livelihood Development, was found hogtied and murdered on school grounds Sept. 1, along with two leaders of the local Lumad community, Dionel Campose and Bello Sinzo.

“Lumad” refers to 18 ethnolinguistic Indigenous tribes from Mindanao. Oplan Bayanihan, the name for President Benigno Aquino’s U.S.-funded “counterinsurgency plan,” has targeted the Lumad, together with Mindanao’s large Muslim population. Mindanao is the agricultural center of the Philippines and is rich in mineral wealth.

The Philippine military has denied involvement in the massacre. But activists pointed out that it fits the pattern of systemic killings under Aquino’s rule. They called on people in the U.S. to demand the closing of Pentagon bases and an end to Washington’s funding of repression in the Philippines.