Haitian President Michelle Martelly liked running the country without a parliament. He could do whatever tickled his fancy. But when his term approached its end — constitutionally, he only gets one — he had to organize parliamentary elections. 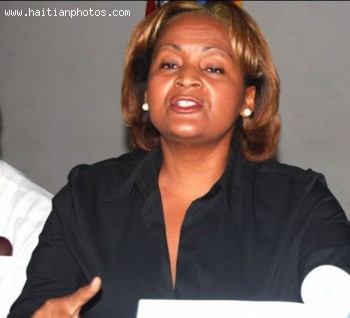 Maryse Narcisse, the Fanmi Lavalas candidate for president, in a Facebook post called the Aug. 9 elections an “electoral coup” and an “electoral masquerade.” Fanmi Lavalas was originally formed to support former President Jean-Bertrand Aristide, who was deposed by a coup in 2004 and forced into exile by the U.S.

Along with supporters of a number of other parties, Narcisse marched in demonstrations demanding the elections be canceled. Several polling places were trashed by armed men; under armed threats, ballot officials had to either go into hiding or sign vote totals in the morning. (Haïti Liberté, Sept. 9)

A number of fairly large marches in Port-au-Prince have both protested the conduct of the Aug. 9 elections and supported presidential candidates like Narcisse.

Some 1,621 candidates ran for 129 seats in the Senate and National Assembly. While official vote totals had not been announced as of Sept. 9, the Provisional Electoral Council (CEP) has announced a few outright winners and, in some districts, the two candidates who will face each other in a second round.

Without official tallies, it is impossible to challenge results. The overall turnout in the Aug. 9 vote was 18 percent, according to the CEP, and only 8 percent in the Department of the West.

Some 50 or so candidates are running for president. The first round of presidential voting will take place Oct. 25, which is also the second round of voting in the parliamentary elections. The CEP has been whittling away at the candidates, declaring one a Canadian citizen who is thus ineligible under the Haitian constitution. Another candidate, Jacky Lumarque, who poses a strong challenge to Martelly’s candidate, was kicked off the ballot because he didn’t submit a form he didn’t have a right to get. (Haïti Liberté, Aug. 29)

During meetings marking the departure of U.S. Ambassador Pamela White, it came out that the United States had donated $30 million to the Haitian elections to “ensure the results were predictable.” Ambassador White dismissed the problems with the Aug. 9 votes as minor glitches that didn’t affect the outcomes. She also pledged $5 million for the second round and the presidential contest.

The first presidential debate in the Haitian election took place not in Haiti, but on the campus of George Washington University in Washington, D.C., on Sept. 15.

With Haiti currently under military occupation by the U.N.’s Minustah operation, it is unlikely an election would pose the kind of challenge to imperialism that happened in the vote for Aristide in 1990. But Washington wants to ensure that political struggles around the current elections don’t go further.