Sept. 21 — Tens of thousands of migrants are living under precarious conditions in Hungary and Croatia as well as other states in the European Union.

Police have used water cannon and teargas to beat down migrants in Hungary. Thousands have been forced into detention centers where they are treated in a manner which has sent shockwaves throughout Europe and the international community. 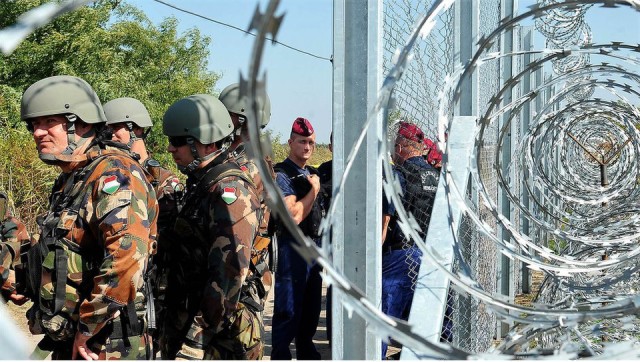 On the Hungarian border.

The British Broadcasting Corporation reported on Sept. 21 that Hungarian Prime Minister Viktor Orban said the migration of people from the Middle East, Africa and Asia threatens the borders of Europe. He called for concerted efforts to block any imposition of quotas for the intake of migrants. He is instead taking militarized and criminal justice approaches to the crisis, for which the European and North American imperialist states are largely responsible.

The BBC report continued: “Viktor Orban said migrants were ‘breaking the doors’ and that a united stance was required. Ministers from Poland, Hungary, the Czech Republic and Slovakia met to discuss an EU proposal for quotas, which they oppose.”

The article noted most importantly, “Some EU countries want migrants shared out more evenly across the EU. Germany and France are among those [that] back plans to share the burden of relocating 120,000 migrants from Greece, Italy and Hungary.”

Illustrating the hostility of the Hungarian government, Budapest placed ads in media outlets of countries from which many migrants originate. One that appeared in Lebanon’s newspaper An Nahar on Sept. 21 warned people not to go to Hungary.

The full-page ad read, “Hungarians are hospitable, but the strongest possible action is taken against those who attempt to enter Hungary illegally. The illegal crossing of the country’s border is a crime punishable by imprisonment. Do not listen to the people-smugglers. Hungary will not allow illegal immigrants to cross its territory.”

A Hungarian legislative measure against migrants was passed recently with the support of the Jobbik party, which appears to be even further to the right than Orban’s center-right Fidesz party. The new measure passed by 151 to 12, with 27 abstentions.

Orban’s government also announced it would send the military to the borders and authorized the use of rubber bullets, pyrotechnical devices, teargas grenades and net guns. These weapons are being adding to an already deadly arsenal that the police have not hesitated to use against migrants, including batons, teargas and water hoses.

In Croatia a similar situation is developing. Migrants have been trapped inside the country, unable to travel freely into Hungary or other neighboring states.

More than 17,000 people crossed over into Croatia between Sept. 16 and Sept. 21, after being forced out of Serbia and unable to move into Slovenia. Croatian Interior Minister Ranko Ostojic said, “The situation is impossible for us.” (NBC News, Sept. 21)

Ostojic talked with the international press while standing at a camp for migrants in Opatovac on the border with Serbia. He said that Croatia is “the victim of Europe’s failed response to the crisis.”

In addition, Ostojic was scheduled to participate in a series of talks set to convene on the crisis during the week of Sept. 21. He called upon European heads of state to “come here and see the situation for themselves.”

Wars of regime change and the world capitalist economic crisis have created a mass migration from the Middle East, Africa and Asia —  the largest dislocation since the conclusion of World War II. But the European and North American imperialist powers act as if they have nothing to do with the current situation involving the scattering of millions from Syria, Libya, Iraq, Afghanistan, Nigeria, South Asia and other regions.

Nonetheless, EU leaders like Angela Merkel of Germany and Francois Hollande of France speak as if they are concerned with the plight of those flooding into Southern and Eastern Europe. The U.S. administration of President Barack Obama announced it would allow 10,000 immigrants from Syria — over the next year.

These empty proclamations are not improving the migrants’ present conditions or providing reassurances to the EU governments being impacted by the policies of the Pentagon and NATO.

Reports of political talks between the State Department and the Russian Foreign Ministry on reaching a political settlement in Syria may be aimed at stemming the tide of migration. The continuation of this crisis will undoubtedly place greater strains on relations among the NATO member-states in Europe and North America.

These pronouncements from EU and U.S. leaders come in the context of the continued bombing and destabilization of states throughout the region which the migrants are fleeing.

Since the conclusion of World War II, the U.S. has fought to maintain its position as the dominant imperialist nation. Wars in Korea, Southeast Asia, Central Asia, the Middle East and Africa have brought massive deaths, injuries, economic hardships and dislocation.

Rather than allow the peoples of Africa, Asia and Latin America to determine their own destiny, Washington, Wall Street and their European allies have sought to prevent the genuine national independence and sovereignty of the former colonial and semicolonial territories. Periodic global economic crises have also added to the shaky viability of the postcolonial states.

Despite the ostensibly more humane and liberal statements coming from Germany and some other governments, the Europeans appear to be totally incapable of receiving and integrating up to several million people from the Middle East, Africa and Asia. In even the most advanced states in Europe, such as France, Britain and Germany, unemployment remains high and poverty is rising.

Some 120,000 people being allowed to “legally settle” in the EU states will not by any means solve the problems of migration. Over 4 million Syrians have been forced to leave their country and are residing in Lebanon, Iraq, Turkey and other states.

In addition, millions more are seeking to enter Europe through the North African and Mediterranean networks established by human traffickers. The imperialist destruction of the Libyan government through massive bombing and ground operations in 2011 created desperate conditions leading to the exodus of many Libyans and foreign workers from a country that had enjoyed the highest standard of living in Africa.