Richmond, Va., Sept. 20 — When organizers of an international cycling race in Richmond, Va., the former capital of the Confederacy, were planning the event’s route, one of the things they said they considered was “showcasing the best the Richmond region has to offer.”

The UCI (Union Cycliste Internationale) Road World Championships, one of the cycling world’s most prestigious events, had only been held once before in the United States. A series of races, the nine-day event opened Sept. 19. More than 1,000 cyclists are expected to compete before 450,000 spectators and a worldwide television audience of 300 million.

“Richmond 2015,” the local organizing committee for the race, chose the more than 70-foot tall, city-owned monument honoring Jefferson Davis as the race’s halfway turning point. Davis was president of the Confederate States of America. That means the committee chose a political entity formed to defend the right of slave owners to be slave owners to “showcase” Richmond. 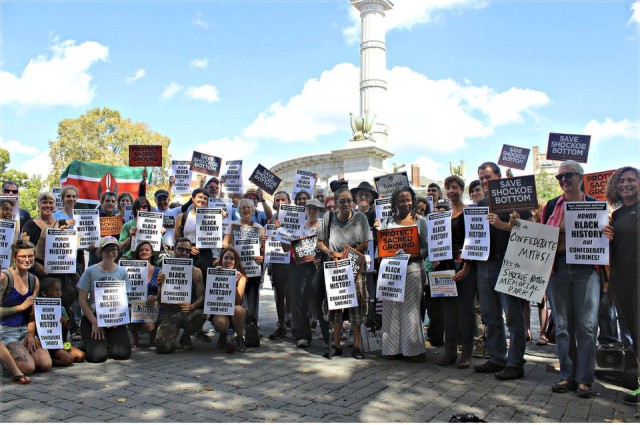 The Davis monument is the largest of five that honor Confederate leaders on Richmond’s Monument Avenue, a broad residential boulevard listed on the National Register of Historical Places. Erected 25 years and more after the Civil War, the statues were meant to signal the return to power of the same white-supremacist Southern ruling class that was in charge until 1865.

Ana Edwards, who chairs the Sacred Ground Historical Reclamation Project of the Richmond-based Defenders for Freedom, Justice & Equality, said her organization had asked the committee chairs to move the race from Monument Avenue to save the city from an international embarrassment.

“They refused,” said Edwards, who counts among her ancestors two women sold from Richmond in the 1840s.

“This is our heritage, this is who we are,” explained McAuliffe, a former chair of the Democratic National Committee who was born in Syracuse, N.Y.

The Defenders also wrote to the UCI International Committee in Europe, which did not respond.

Edwards was the main speaker at a Defender-hosted press conference held Sept. 19 in front of the Davis monument. More than 100 supporters attended.

“So we are here today to tell the world that most Richmonders do not support showcasing these monuments to Confederate military and political leaders during this world-famous sports event,” she said, “at a time when cities across the country are removing these symbols of the oppression of Black people precisely because they continue to contribute to the nurturing of racism in today’s world.”

Others speakers were Rebecca Wooden Keel of Black Lives Matter and Deric Beale of Virginia (“Fight for $15”) Raise Up. The National Trust for Historic Resources and Preservation Virginia presented written statements. These two groups are prominent nonprofits working with the Defenders to reclaim and properly memorialize Shockoe Bottom, a neglected section of downtown Richmond that once was the epicenter of the U.S. domestic slave trade.

The Defenders also produced a special edition of their quarterly newspaper, The Virginia Defender, explaining to visitors the significance of Monument Avenue. (www.DefendersFJE.blogspot.com)

Helping to make the race route a national issue, the United National Antiwar Coalition set up an online petition supporting the position of the Defenders, a founding UNAC member organization.

A pro-Confederacy group, the Virginia Flaggers, short of forces to counter-protest the press conference on the ground, chose instead to hire a plane to fly with a Confederate flag above the site.

The Defenders have played a leading role in an ongoing campaign to prevent the mayor, backed by the governor, from building a baseball stadium in the heart of Shockoe Bottom. The two sides now have competing plans for the area’s development. For information, see SacredGroundProject.net.