The Turkish government, as well as admittedly fascist elements, have opened a broad attack on democratic organizations throughout western Turkey. Meanwhile, the Turkish army has continued its assault on the Workers Party of Kurdistan (PKK), both guerrillas and civilians, in the majority Kurdish southeast of the country.

The U.S. and other NATO governments support the Turkish regime’s offensive. The Ankara regime recently granted the U.S. Air Force the right to use military bases inside Turkish borders to carry out bombing raids against Syria and Iraq. Turkey’s government has also waged war and subversion against the Syrian government.

Turkish President Recep Tayyip Erdogan schemed in last June’s national election for his ruling Justice Party (AKP) to increase its majority to 60 percent of the seats in Parliament. Had he achieved this, Erdogan would have been able to change the Turkish Constitution and consolidate his presidential rule.

Instead, his AKP lost 71 seats, winning only a minority — 258 — of the 550 seats. A new leftist coalition party, the Peoples Democratic Party (HDP), with much support from the Kurdish population, won a surprising 79 seats. The AKP, still the biggest party in parliament, was forced to call a new national election for November. 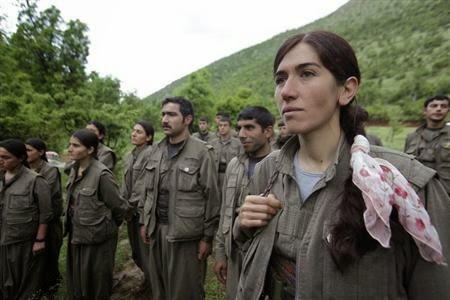 Fortified by its deal with the Pentagon, the Erdogan regime then opened up an air war on the PKK in Iraq and against Kurdish forces in Syria, while stepping up repression in the Kurdish regions. The PKK liberation forces, which had been engaged in peace talks with the Erdogan regime over the past two years, fought back. Turkish army and police forces killed Kurdish fighters and many civilians, but also took casualties as the PKK retaliated.

In the latest escalation, the AKP and the fascist Nationalist Movement Party, also known as the Grey Wolves, attacked and firebombed offices of the leftist HDP and the homes of some of its members throughout Turkey on Sept. 8 and 9.

During the June elections, the HDP campaigned on demands to raise the minimum wage, improve access to university education and achieve gender equality. It promised to create a ministry of women and make International Women’s Day a national holiday. The HDP has a man and woman, respectively, as co-chairs: Selahattin Demirtas and Figen Yukseldag.

At a press conference in the eastern city of Diyarbakir on Sept. 9, Demirtas charged that while the army and police are carrying out state terror against civilians under a curfew in the majority Kurdish cities in eastern Turkey, in the west of the country, Erdogan is encouraging open street terror by fascist thugs. Within two days, there were more than 400 assaults and attacks on party offices, newspaper offices, shops and houses of Kurds and tents of Kurdish seasonal workers across the country. More than 300 attacks were carried out on HDP offices, with some burned to the ground. (Junge Welt, Sept. 11)

Demirtas called on supporters of his party to organize self-defense squads. He said the attacks were not spontaneous reactions from the population in response to attacks by PKK guerrillas, as the government alleged, but a dress rehearsal for a civil war. He accused the AKP and the Turkish secret service of coordinating the attacks on his party.

On Sept. 10, the German daily newspaper Junge Welt published an interview with Semra Dogan, co-chair of HDP in the Kadiköy district of Istanbul, in which she explained her party and the new situation.

The HDP “is a joint project of the Kurds, the left and the democrats,” she said. “We are fighting for equality, freedom and peace. Since we got 13.2 percent of the vote in the parliamentary elections on June 7, the state has been trying to stop us. The police and military operations are part of a long-prepared plan to crush the democratic forces and open the way for the presidential system sought by Erdogan.”

She continued: “Kurdish cities have pro­claimed autonomy because they feel threatened. It serves a legitimate self-defense. The state wanted to lynch the residents. The guerrilla forces have repeatedly stated that they will not go to war, and will limit their action to self-defense. But the armed forces bombard the guerrillas and their base areas, trying to provoke them into an active war.

“Erdogan and his AKP need dead soldiers [to arouse nationalist fervor against the Kurds]. The president knows that he was backed into a corner by these tactics — he is now trying to mobilize nationalist votes to continue to hold on to power.”