Following is a transcription of a talk given by Chairman Fred Hampton Jr. of the Prisoners of Conscience Committee/Black Panther Party Cubs at the 2015 Streetz Party. The event is an annual celebration of the Aug. 30 birthday of his father, Chairman Fred Hampton of the Black Panther Party, who was assassinated by the Chicago police on Dec. 4, 1969.

The Streetz Party kicks off every year with a memorial in front of what they call “our Ground Zero, where the pigs took out our twin towers, Chairman Fred Hampton and Defense Captain Mark Clark,” at 2337 W. Chairman Fred Way (aka Monroe Street). Those gathered march to The Wall, a giant mural of Chairman Fred Sr. at Madison and California on Chicago’s west side, painted by the Rebel Diaz Arts Collective from the Bronx, N.Y.

This year, Pam Africa, Minister of Confrontation for the MOVE organization, spoke about the cop assaults on MOVE headquarters in Philadelphia in 1978 and the police bombing of their home and the surrounding neighborhood in 1985. Comrade Mother Akua Njeri, Black Panther Party former member and mother of Chairman Fred Jr., gave a talk about her experiences surviving the early morning cop assault of Dec. 4, 1969.  Also in attendance was Kanahus Manuel, a representative of the Secwepemc Nation from Canada. 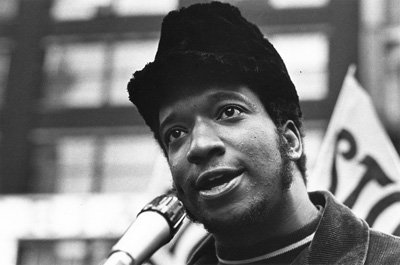 Those who missed the event yesterday, I’m still charged up off it. Like Chairman Fred used to say, I’m too proletarian revolutionary intoxicated to be astronomically intimidated.  In plain language, I’m too high off the people to be shook up.  It’s a strategic reason why the state don’t want you to know about these type of dynamics, these forces that fought our interests. There’s a strategic reason why they give us these watered-down, sanitized individuals and say, well, you did gain these types of concessions because of this person.  They don’t want you. You can’t make those connections off of people that look like us and talk like us and come from like conditions and resistance that’s happening. …

It’s the system that gives us the impression that we got to go get a certain amount of degrees, through a certain amount of process before we’re able to fight, and then get approved on them on how to fight.  We can’t get caught up on no conventional type of tactics and means.  Let me be clear that this is the system where chattel slavery was legal.  So we can’t get caught up in that whole dynamic where we frame it in terms of what’s legal.  We must be out with the politic that is able to put it in the context of who we talking about. …

Sun Tzu said, the cardinal principle of warfare is to know thyself and to know thy enemy.  If you come in with some abstract, elementary (it’s no disrespect to anybody) ideology, if you come to some abstract, simple dynamics that think it’s as simple and plain as Black and white — abstract nationalism — you missed the Negropeans like William O’Neil that done came in here, you bringing a knife to a gunfight.

At this stage in the game, we got to be on with a politic that expose and deal with not only Uncle Sam, but Sambo.  The gringo and the negro.  The stakes are too high.  It’s not as simple as Black and white.  We’re gonna start working in to the people and draw the line of demarcation in the community we work in.  And we look at the world, how the state functions. A lot of people look at certain dynamics: this is where I live at, and this person’s on this side of town, or this person’s this type of astrological sign or whatever. These kind of dynamics are cool in certain arenas.

But the bottom line, a personal contradiction. When you get through something so powerful, it penetrates something; crack, racism, penitentiaries — all that type of dynamics. It transcends all these other different barriers. Those are the real deal contradictions.

A lot of cats, they trip on us. Why we so intense?  We got this radio show we do weekly, and I’m so intense about what type of music you gonna play on there before you go on.  Don’t bring no abstract “conscious” artists on there that ain’t down. Don’t disrespect. The stakes are too high.  We got cats who doing rap like this cat Dom P., my little nephew who locked up. But the stakes are too high for this kind of abstract, feel-good type of thing. …

[Introducing Pam Africa] Policeman beat her down, and they told her just let go of the tie. The harder they beat her, the harder she trick on they tie, real talk.  This is ghetto folk, not folklore, but real-deal stories.  This ain’t no abstract speakers that’s coming out here that’s talking to you.  Just wanted to get that off my chest.  Please seize the time.  Please seize the time y’all.  Don’t tell me about no ‘back in the days, I’d a been involved in the struggle …’  This day and age, with all the information you can type on your phone or whatever. Use context clues, all the news that’s not put on the TV all the time. There’s forces struggling right here and now, today. Seize the time.