An electoral earthquake has shaken Britain’s Labour Party. Jeremy Corbyn, who, while taking consistent leftist and anti-militarist positions as the representative in Parliament of London’s Islington North neighborhood since 1983, was elected party leader by a landslide 60 percent of the vote against three other candidates. The Sept. 12 Guardian newspaper described Corbyn as “one of the most left-wing, anti-establishment leaders in [Labour’s] history.”

The next national election is scheduled for 2020. Corbyn’s election as leader of the number two party makes him head of a shadow cabinet. His group will confront the ruling Conservative Party and rightist Prime Minister David Cameron. Corbyn’s election is a rebuff by the working class and youth in Britain to the politics of anti-worker austerity and imperialist war that has characterized both Conservative and recent Labour governments.

Whatever its impact on the 2020 election, Corbyn’s victory opens the possibility to mobilize both mass sentiment and street demonstrations to oppose austerity and war. 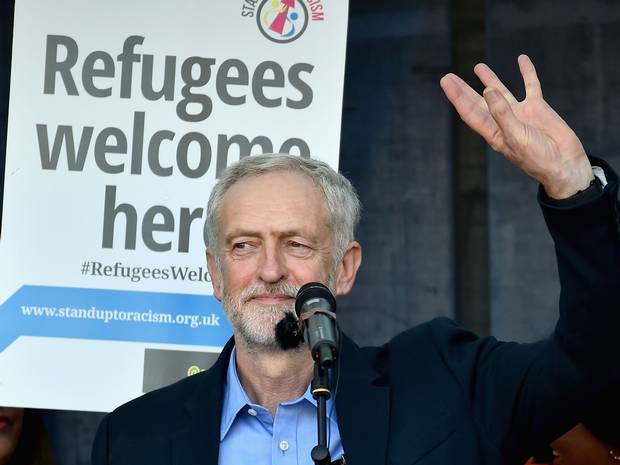 The Conservatives have already reacted by calling Corbyn “a threat to national security.” This frontal attack is itself a sign of their nervousness that behind this change in Labour’s leadership is a change in the mood of the masses in Britain. It means that workers and youth especially are fed up with politics as usual and are looking outside the box for solutions to their crisis.

Britain was not the first country in Europe to show that the working class is fed up. Expressions of this through voting shifts have already taken place in the following countries:

In the United States, Bernie Sanders’ large and energetic rallies are also a sign that a large number of people, especially youth, are fed up with politics as usual and want to fight austerity and increase economic equality. Sanders’ own shortcomings — support for U.S. imperialism and Israel and his insensitivity to the Black Lives Matter movement — may understate how ready his supporters are to back an anti-war program and African-American equality.

Corbyn’s history in the Labour Party

Corbyn has been virtually unknown in the United States, even within the radical movement. This writer first became aware of him in November 2001, soon after the U.S.-British invasion of Afghanistan. At a protest meeting in Madrid, Spain, we represented the anti-war movements of our respective countries. It was early in the post-9/11 imperialist aggression that was to swallow up Afghanistan and Iraq under George W. Bush in the U.S. and Labour’s Tony Blair in Britain — two war criminals.

Corbyn was impressive with his lack of swagger. He showed more sensitivity to helping the meeting be a success than to spotlighting his talk. He went on in subsequent years to becoming a leader of the Stop the War Coalition, and currently is chair of that organization, which has been the leading anti-war group in Britain. In January 2003 he spoke at a major anti-war rally we helped organize in Washington against the oncoming war on Iraq.

Corbyn was the first to invite Gerry Adams of Sinn Fein to the British Parliament as early as 1984. He is also known for supporting rights for lesbian, gay, bi, trans and queer communities.

Corbyn also opposed NATO’s 2011 attacks on Libya and its current aggressive stance on Ukraine. He spoke out against the Israeli invasion of Lebanon in 2006 and its bombings of Gaza in 2008 and 2014. On Sept. 12, the day following his election as Labour leader, he left Parliament to speak at a London rally of 50,000 people in solidarity with the refugees in Europe.

Corbyn has been one of the few Labour members of parliament to consistently oppose all privatization. He has flouted the official Labor leadership in Parliament to vote against all austerity — that is, all anti-worker measures.

Within Labour’s group in Parliament, Corbyn got support from only 20 of the 230 members. Betting odds against his election were 200 to 1. Recent changes in Labour’s voting rules, however, tripled the eligible rank-and-file voters to 500,000. And he won support from some of the major trade unions. The mass of rank-and-file youth and worker votes overwhelmed the Tony Blair-Gordon Brown “New Labuor” parliamentary faction.

As Friedrich Engels wrote in “The Origin of the Family, Private Property and the State” in 1884, all elections can do is provide a “gauge of the maturity of the working class. It cannot and never will be anything more in the modern state.” Since that time, the capitalist ruling class has tightened its hold on elections and on state power.

No matter how principled the individual, a Labour Party leader who doesn’t surrender to the ruling class will face enormous hostility from those who control the enormous banking, media, police and army power of British imperialism, including the monarchy. A much different kind of struggle — a class struggle — will be needed to actually change this balance of forces.

Nevertheless, Corbyn’s election to Labour Party leader shows that a large section of the masses in Britain — which now has a broad, multinational working class — is ready for struggle. Let’s hope this “maturity” develops and spreads throughout the imperialist countries.