The U.S. government issued its monthly jobs report on Sept. 4. Although only 173,000 new jobs were added — fewer than expected — the Obama administration immediately heralded the new unemployment figure of 5.1 percent, which they claim is the lowest since 2007.

Does this mean — as many capitalist apologists and economists claim — that the U.S economy is improving and that workers are better off now? It is crucial to look at the lies and obfuscations behind the report.

The Bureau of Labor Statistics, which creates these figures, has a very arcane way of determining who is “unemployed.” The figure is not an accurate measure of the number of people who want and need jobs. The real unemployed are not counted.

Rather, the BLS surveys 60,000 households, which are selected because they “represent” different U.S. regions and populations. The bureau asks people in those households whether they have been actively seeking work in the prior four weeks. If they have worked at all during that period, regardless of their earnings, or whether the work is part-time or sporadic, they are counted as employed.

A more accurate, but still very imperfect, BLS figure is the labor force participation rate. This shows that only 62.6 percent of the non-institutionalized, non-military population was employed for the third month in a row. This means that 37.4 percent — or 94 million people —  were not employed. This is the highest number since 1977.

The U.S. government does not report or explain why these people do not have jobs.  For one reason, there has not been a real jobs’ recovery since the Great Recession began. Many employers have cut their work forces, using speed-ups and automation with fewer workers, hiring part-time or temporary employees or outsourcing jobs abroad.

The government statistics omit the millions of unemployed workers who despair of ever finding jobs and have given up. The Sept. 4 Fiscal Times says that the low labor force participation is “a sign that the [official] unemployment rate may be low because workers who might otherwise be seeking jobs become discouraged by the lingering effects of the Great Recession and have permanently left the labor force.” 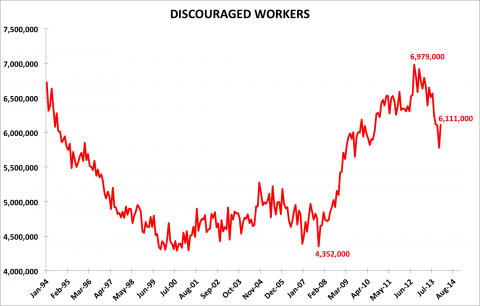 The BLS does note that 6.48 million people who need full-time jobs are involuntarily working part time, an increasing trend. The government also reports, but neglects to explain, the steady decline in wages and benefits for workers lucky enough to have a job. For most workers, real wages — adjusted for inflation — have stayed flat or been falling for decades. And for those working in the top four employment categories today — retail sales, food preparation and serving, cashiers and office clerks — the pay is less than $10 per hour.

Then there are the millions of workers who earn less than minimum wage or do unpaid work, who are among the most exploited, including agricultural and dairy workers, domestic workers, those toiling in sweatshops, immigrants, prisoners, people with disabilities, tipped employees and victims of human trafficking.

Moreover, government reports do not address racist, anti-immigrant, sexist and anti-lesbian-gay-bisexual-transgender-queer bigotry and discrimination which factor into who is hired and who is not. Discrimination against people with disabilities is omitted.  Prisoners are not even counted. The denial of educational opportunities to low-income individuals and the exclusion of youth — especially African American, Latino/a and Indigenous — from many jobs are not discussed. The biases against entire groupings of workers — so endemic to capitalism — are not mentioned in “official” reports.

The “reserve army of labor” is the term coined by Karl Marx for the vast numbers of jobless workers. This unemployed “army” is intrinsic to capitalism and key to how it functions. But it is one of the system’s greatest vulnerabilities. Corporate bosses fear that the multinational working class will launch a powerful fightback, expanding the current “$15 and a union” demand for low-wage workers to “Jobs for all at a livable income!”