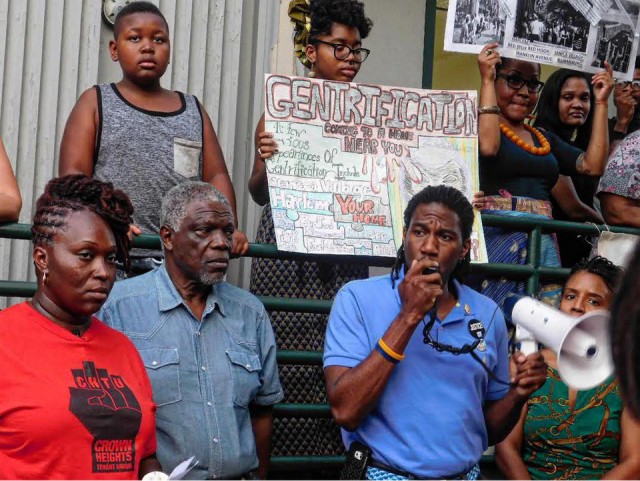 Today, tenants rallied to demand a meeting and fair agreement with their landlord, Renaissance Realty. They spoke out in front of their Schenectady Avenue apartments, declaring a state of emergency. They told how their landlord “is exploiting loopholes in the laws to double or even triple our rents!” Many explained how their families have lived here for 40 years or more, but “today our landlord tries to kick us out. We built this neighborhood!”

As luxury housing intrudes in more working-class neighborhoods, realtors capitalize by turning rented apartments into condos, even when there are not affordable homes to move to.

Today’s rally enjoyed the support of the Crown Heights Tenants Union. Several politicians showed up to stand in the spotlight of cameras and reporters — although some of them have been seen, more than once, supporting developers with long-range plans for more racist gentrification of this area!

While elected officials present themselves as sympathetic for evicted tenants/renters, they ignore the displacement of working-class families by developers whom they make deals with. So tenants’ groups grow, with plans to expose what these politicians really offer! Meanwhile, people learn firsthand how the capitalist government does not serve their interests. These groups will continue to organize, demanding fairness, affordable housing and to live under a system that protects and guarantees such rights for everyone.
A citywide demonstration by homeless and housing/tenant groups is planned for Sept. 17 by the Brooklyn Anti-gentrification Network. Community organizers plan to publicize this demonstration by tabling at Brooklyn’s West Indian Day Parade. Held on Labor Day, the parade brings thousands together to celebrate a cultural and political time. BAN will be there to support working-class and oppressed peoples’ unity building. As was chanted at the Schenectady Avenue tenants’ rally, “If they don’t get it — shut it down!”