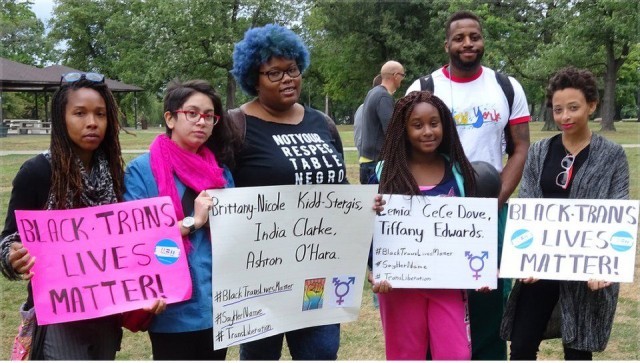 People gathered Aug. 25 in Cleveland’s Luke Easter Park, a main green space in the African-American community. They were part of a national call by the Black Lives Matter movement in response to the epidemic of murders of Black transwomen. Under the hashtag of #BlackTransLivesMatter, 20 cities held gatherings and actions to fight back against the violent hate crimes being committed against this segment of the African-American community.

There have been at least 17 transwomen killed in 2015. Fifteen of the 17 were Black or Brown. (MSNBC, Aug. 15). This number is most likely low do to frequent misreporting of gender by the mainstream media.

While holding signs, the participants gathered in a circle. Each person made a commitment to at least one action that will help to push back against the bloody toll that racism and bigotry have taken on our sisters.

There was also a saying of the names of murdered Black transwomen (an important part of recognizing the humanity of the individual) and discussion of how the larger community can help to create safe space for much needed healing and support for loved ones of murdered ­transwomen and transmen.

The circle was then broken and balloons were released into the late afternoon sky, each one representing a murdered Black transwoman. This is the price too often paid for living authentic lives in a racist and transphobic society.

However, the fightback against hate is growing stronger every day. #SayHerName, #TransLiberation, #BlackTransLivesMatter