The following statement from the people’s lawyer and former political prisoner, Lynne Stewart, was read by Betty Davis, a longtime activist for community control of education and a member of the New Abolitionist Movement, at the Aug. 26 Women’s Equality Day speakout in New York City. 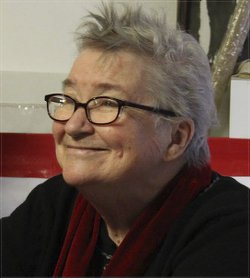 I truly regret not being able to join you.  I am going to take advantage of some cool, clean upstate air and just sitting on the porch with a glass of iced tea and thinking.

We are in the dog days when things move slowly but no less urgently for that.  We must use this hiatus in our busy-ness to get ready to go forth into the autumn.  There is so much.  Iran, ISIS, Greece, and at home, climate, the growing gap between rich and poor, and the prisons. So much of our work must emanate from the horror that are those death camps.

Having an impact on so many, and of course, sustained by the blood-stained dollar are the jails that deliver a living hell to the younger prisoners and often a death warrant to the elders. As most of you know, since you brought me home from Carswell [prison] almost two years ago I have been focused on the release of political prisoners, the heroes of our movement in the ‘60s, ‘70s and ‘80s.  Many of them have been imprisoned for almost 50 years and they are dying; witness the transition of our beloved Hugo Pinell in California.

They are counting on us to bring them back now to the community of hope and struggle and change that they have continued to serve, even behind cruel prison bars.

I believe the time has come for us to defeat the omnipotent police force that lobbies for continued incarceration; to use all the legal tools available, to go to the centers where people can be roused to bring home these sons and daughters.  We must forge a bond, a natural one between those who have lost a loved one to the army of occupation and our political prisoners.

So much to do. So much to accomplish. Can we do it??  We can. We must!  Start getting ready for great days ahead! Dare to struggle, dare to Win!