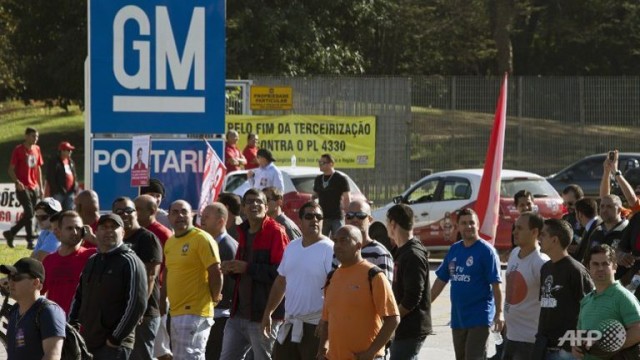 On Aug. 8, General Motors do Brasil, which has four plants in the country, announced there would be 798 workers permanently laid off at its São José dos Campos plant. There was no advance notice; the layoffs began immediately for the first 300 workers. In less than 24 hours, the Metalworkers Union of São José dos Campos launched a strike to save the workers’ jobs.

“GM has high profits and does not justify these layoffs,” union Vice President Herbert Claros stated in an email to international supporters. “Workers who have been laid off and their families understand that these dismissals are unfair and therefore are getting strong on the picket line.” GM tried to justify the layoffs by claiming there is a sales crisis. In fact, car sales in the U.S. are above pre-recession levels and profits continue to reach levels unseen in GM’s hundred-plus year history.

During the course of the 12-day strike, the union held mass assemblies of workers and staged a half-hour highway blockade. This was the second strike at the plant this year, the first being a stay-in “standstill” in January that forced GM to cancel planned layoffs.

On Aug. 22, GM and the union reached a settlement. The permanent layoffs would all be converted to five-month temporary layoffs. On Aug. 24, at a mass assembly of 4,000 workers, union members voted to accept the settlement.

Now Brazilian Volkswagen workers are on strike in the city of Taubaté. Like nearby São José dos Campos, this small industrial city lies about 60 miles northeast of São Paulo on the road to Rio de Janeiro. The strike, called by the Taubaté Metalworkers Union, began Aug. 17, the same day VW announced 100 permanent layoffs. As of Aug. 29, the strike is continuing.