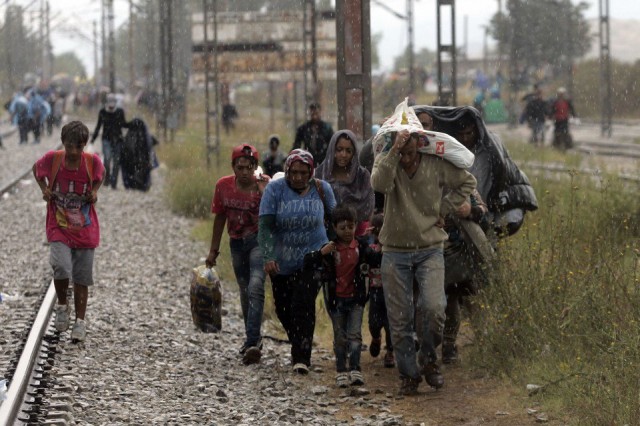 Recently, these horror stories in the corporate media have focused on how migrant human beings are suffering during their journey through the Balkan peninsula. Most of these recent migrants are from Syria, Iraq and other countries of Southwest and Central Asia. The intention of most of these suffering people is not to stay in the Balkan countries that are themselves impoverished colonies of either Western Europe or the United States. The migrants want asylum in Germany or Britain where jobs are still available.

Some who reached Germany wound up besieged by Nazis on the Aug. 20-21 weekend in the small city of Heidenau in Saxony in the East. “Nazis” is not just name calling. The so-called National Democratic Party of Germany, which organized the anti-immigrant riot and attempted pogrom, is the actual continuation of the Nazi Party. During that weekend the NDP mobilized its storm troopers, who nearly burned down the migrants’ temporary housing.

As some working-class organizations in Germany have pointed out, the so-called democratic politicians in Chancellor Angela Merkel’s government and party, as well as many Social Democratic Party politicians, have made the Nazis’ work easier. They’ve done this with their own vicious anti-migrant statements — similar to what politicians here say regarding migrants from Mexico and Central America. Think Donald Trump, who is only the worst of a reactionary pack in the United States.

Now some of these government leaders in Germany are condemning the Nazi violence. But they created the atmosphere that allowed the Nazis to mobilize.

The corporate media’s coverage omits the back story. Why? Because this story exposes the role of imperialism and the major imperialist countries.

For example, when the International Monetary Fund imposes austerity on African countries to assure their debt payments, it results in less work and social benefits, which drives young workers out of Africa. A consequence is the drowning of hundreds, maybe thousands of people when boats capsize in the Mediterranean Sea.

What drove this crisis to unprecedented heights was NATO’s bombing, invasion and subversion of Libya and Syria, starting in 2011.

Libya’s economy had employed a million workers from sub-Saharan Africa before 2011. U.S.-NATO bombs and the arming of elements similar to the Islamic State overthrew the stable and relatively prosperous Libyan government of Col. Moammar Gadhafi, killing him and making the country hell to live in.

In Syria, too, the U.S. and its NATO allies, especially Britain, France and Germany, as well as Turkey, provided arms to elements that consolidated into the Islamic State. To overthrow the Damascus government, the imperialists provoked a disastrous war that has torn apart the country, creating a mass exodus.

The reactionary Hungarian regime, taking a page from the U.S. anti-immigrant book, is building an obscene fence on its borders to try to keep out the suffering migrants. As criminal as this act is, it is not Budapest that caused the crisis. Nor did the Greek, Macedonian and Serbian governments. The richer NATO countries and the U.S. government are to blame. They should be paying reparations to the Syrians and other migrants for the nightmare they, the imperialists, have caused. Such payments would not be charity, but reparations for their war crimes.

Workers in Europe should not be misled by demagogues who make migrants scapegoats for the problems these workers face in their own countries. The European workers’ enemies are not their fellow workers who are forced to migrate, but the imperialists who have systematically undermined postcolonial governments that have been trying to exercise their independence and autonomy after at least a century of bondage.

If all this sounds like a mirror image of what is happening regarding migrants to the United States from Mexico and Central America, this is no accident. Imperialism is the enemy of workers and farmers worldwide. There will always be reactionary politicians — Trump comes to mind, but he’s not alone — who try to play the demagogue and scapegoat migrants. Shut them down!

The migrants are our class allies, and we should stand in solidarity with them, in Europe as well as in the United States.