U.S. imperialism attempts to undermine any government in Latin America that exhibits independence from Washington’s dictates. In the past weeks especially, the governments of Ecuador and Brazil have been facing protest demonstrations, including rightist elements, which are promoted by imperialist media.The following statement was written by leftist intellectuals in the region opposing U.S. intervention and translated by WW managing editor John Catalinotto. 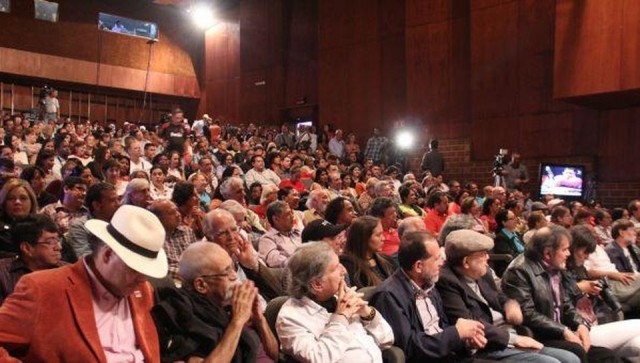 Network of Intellectuals, Artists and Social Movements in Defense of Humanity.
Photo: teleSURtv.net

We, representatives of social movements of Panama, as a broad expression from the Panamanian people, first of all express our strong support for the statement by the Political Council of the ALBA-TCP, developed at an extraordinary meeting in Caracas on Aug. 10. [ALBA-TCP is a trade agreement among Latin American nations. — WW]

Likewise, we denounce the plans of imperialism, which by using strategies of destabilization, stalks and conspires to overturn progressive governments of the region legitimately elected by their ­peoples.

It is no coincidence that demonstrations with similar characteristics are taking place simultaneously in countries whose peoples have decided to take the path of emancipation. Such demonstrations are encouraged and supported by external elements and the media that serve the interests of the oligarchies.

This description fits the specific cases involving the incessant attacks against Argentina, the Bolivarian Republic of Venezuela, the Republic of Ecuador, the Plurinational State of Bolivia and more recently against the Federal Republic of Brazil and the Republic of Ecuador, where similar destabilization scripts have been repeated, put into effect through financing, training, manipulation and other strategies of UNCONVENTIONAL WARFARE,* like those that have already been carried out in countries such as Iraq, Syria, Libya, Ukraine and others, in order to undermine the sovereignty and seize natural resources belonging to the people.

*According to Training Circular 18-01, one of the principal U.S. documents on the doctrine of unconventional warfare for the Special Forces Operations of the United States Army, unconventional warfare is interference in a country, and its political purpose is to obtain dominance without using war technology. It is a physical penetration of a political, economic and cultural character, carried out by a powerful country in unequal conditions in order to force the other country to submit and to expropriate its water, mineral and/or energy resources. This tactic has been devised not only as a major form of aggression, but as a strategic tool of U.S. foreign policy.

The United States deploys all its might beyond its borders, using a strategy that is not in itself new, but it is now assigning this strategy a new level of priority. Acts of unconventional warfare are those aiming to undermine and degrade the morale and the political, psychological, military and economic strength of the country as well as to trigger events that are catalysts for creating conditions leading to foreign intervention.

The media play a crucial role in this strategy. In Panama, for example, we have a press that misrepresents the facts, spreads disinformation and distorts the news in the interest of powerful groups in the country.

In this regard, we reaffirm our commitment to respect the sovereignty of states and non-intervention in the internal affairs of our people. At the same time, we express our repudiation of the attempt to undermine the democratic institutions of Ecuador and Brazil, carried out by sectors of the right wing orchestrated by U.S. imperialism and groups possessing media and economic power at an international level. We support the people and the government led by President Rafael Correa in Ecuador and President Dilma Rousseff in Brazil, in their efforts to solve their problems while preserving peace, democracy and the well-being of their peoples. We reject the implementation of “soft coups,” through the use of psychological warfare operations that undermine legitimately constituted governments using the means of communications.

Likewise, the undersigned reaffirm the need to strengthen the continental unity of our peoples and regional integration, to address these threats, in order to defend human rights, our sovereignty and the free development of our peoples.

We the undersigned: Network of Intellectuals, Artists and Social Movements in Defense of Humanity, Panama chapter.