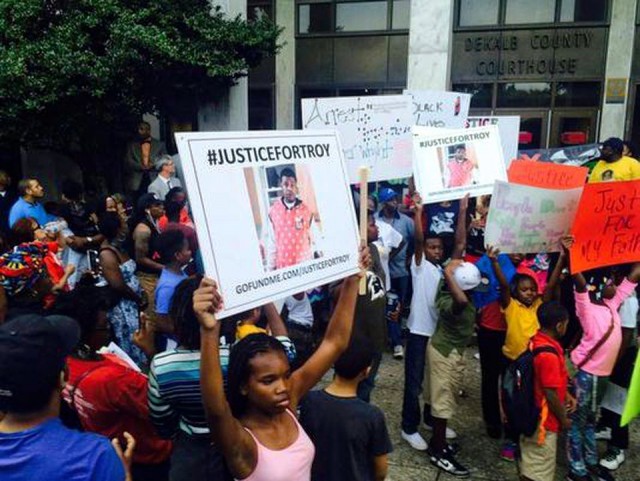 Atlanta — On Aug. 21, a crowd of family members and community activists gathered at the DeKalb County Courthouse to protest the death of 32-year-old Troy Robinson, who died after being Tasered by police on Aug. 6.

Robinson was a passenger in a car that was stopped in a neighborhood where police were conducting a “robbery suppression detail.” Reportedly, the reason for the stop was a tag violation. The car had a temporary drive-out tag from a dealer. In Georgia, it is illegal for police to stop a vehicle simply to check the validity of a tag.

The driver of the car informed police that he had a legally permitted handgun. While police were securing the gun, ­Robinson exited the car and began running away.

DeKalb officer Casey Benton followed in pursuit. Robinson attempted to scale an eight-foot cement block wall. Although another police officer was on the opposite side of the wall, Benton used his Taser to strike the unarmed Robinson in the back, causing him to fall and break his neck.

Numerous witnesses claim that police did nothing to assist the injured man, despite his pleas for help. Authorities say he died at the hospital.

Lawyers for the Robinson family charge Benton with violating the county department’s use-of-force rules, which prohibit the use of a Taser when a suspect is fleeing and when its use would likely cause a fatal fall.

The Georgia Bureau of Investigation is in charge of determining the facts in this case.

Robinson’s death at the hands of the police is one more in a list of suspicious deaths that includes those of Kevin Davis and Anthony Hill.

Davis was shot in his own home after he called 911 for help for his injured girlfriend. Hill, an Afghanistan veteran, naked and suffering from a mental breakdown, was shot in the parking lot of his apartment complex.