It’s been a long, two-and-a-half-year fight to free Carlos Riley Jr., from Durham County jails in North Carolina. However, on Aug. 14, after weeks of family members and supporters packing the county courthouse, a big step was taken towards justice in his case. 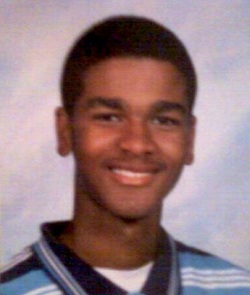 Jurors found Riley, who had been accused of shooting a Durham police officer, not guilty of all state charges, except for “common law robbery.” Riley is appealing the last charge.

On Dec. 18, 2012, Riley had been sitting in his car on the side of the road after dropping his girlfriend off at work. Off-duty Durham police officer Kelly Stewart approached Riley in an unmarked car and began to harass him. Riley struggled in self-defense against an unwarranted stop and being attacked by the cop. Stewart then pulled his gun out and, yelling threatening language, shot himself in the leg.

The Durham Police Department and other officials attempted to keep this from getting out. They accused Riley of fighting with and shooting the officer, and then stealing his gun. But documents presented in court showed otherwise, including “1 shot fired by officer” written on an official DPD Gunshot Residue Analysis form less than two hours after the incident.

Riley was facing 460 months — 38 years — of state prison time, but he refused a plea deal and chose to fight for justice before a jury. “I am happy that he stood strong to not take a plea that was offered,” Riley’s father, Carlos Riley Sr., told Workers World. He continued, “He was offered a plea to walk free, but he refused because he wanted to fight for not only himself, but other Black men that have been faced with the same situation of police brutality.”

District Attorney Roger Echols, working closely with the Durham Police Department, attempted to cover the department’s tracks by smearing Riley with criminal charges — just as cops and the media do in almost every case where Black people are either killed by cops or defend their lives. The DA claimed that Riley shot Stewart with Stewart’s gun. The DA and police tried to keep several pieces of crucial evidence — that proved Stewart had shot himself, despite his testimony that he did not shoot his gun — away from the jury.

However, family members and community supporters packed the court for the nearly three weeks of trial, sitting in the room and keeping pressure on the judge and jury, while defense attorney Alex Charns brought out some of the racist tactics of the police. Charns cited figures showing that in the year before Stewart was shot, his traffic stops involved Black people 77 percent of the time. Charns also delivered subpoenas to Police Chief Jose Lopez, which were denied.

Before the trial started, prosecutors had requested an off-the-record sidebar discussion with the judge and attorney Charns, during which they requested the judge remove Charns from the case. Charns then asked that the discussion be put on public record and the judge refused the prosecution’s request.

In the lead-up to a previously resolved federal trial that took place in 2013, three separate public defenders who had been appointed to Riley’s case all backed out under political pressure. There had been dozens of demonstrations demanding freedom for Riley. Several community organizations, including Liberty and Justice for Carlos Riley Jr., SpiritHouse, the Inside-Outside Alliance, the Durham Solidarity Center and many others joined together to challenge the city, county and federal governments to drop the charges.

Many of the rallies took place outside the new, state-of-the-art correctional facility in downtown Durham, where Riley was held. On one occasion, the street in front was shut down for 30 minutes by protesters, impacting visitors to the fancy Durham Performing Arts Center across the street. The center draws in millions of dollars of revenue for the city every year.

During the lead-up to his federal trial, Riley — who was only 21 years old at the time — was under extreme pressure. Facing several decades in federal prison, he had agreed to a guilty plea on one charge in exchange for dropping the remaining charges at the federal level. This resulted in a maximum sentence of 10 years, which he is now serving.

The information uncovered as part of this most recent state trial was being withheld by the DPD during the federal trial — illustrating one of the terrible problems that have led to an incredibly unjust system of mass incarceration. Ninety-seven percent of federal convictions are the result of guilty pleas that force people to serve prison sentences without ever getting a trial.

Riley, like millions of other Black, Brown and working-class prisoners in jail, won’t be free until a massive movement in this country can topple this entire system once and for all and replace it with a system run by the masses.