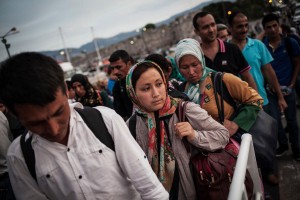 Seven thousand refugees arrived in July on the small Greek island of Kos, some 2.5 miles off the Turkish coast, according to the International Organization for Migration. The flow of refugees increased in August.

The IOM said on Aug. 14 that nearly 250,000 migrants had crossed the Mediterranean Sea to Europe this year. Greece alone reported 134,988 arrivals from Turkey since January. While the number of refugees crossing the Mediterranean from Libya — a more costly and dangerous journey — has remained steady, the flow to Greece is exploding.

But Greece is in the midst of a deep financial crisis, under harsh austerity rules that prohibit hiring enough people to register refugees, according to Panagiotis Nikas, the head of Greece’s reception system. (The Guardian, Aug. 14) Since most refugees arrive at Greece’s Ionian islands, this personnel shortage is compounded by the difficulty of moving people from island to island.

The situation in Kos is made more difficult by the anti-migrant attitude of its mayor, George Kiritsis. He opposed creating a reception center and providing relief to the refugees since their presence interferes with the tourist trade.

The PAME trade union confederation in Greece, which represents workers on Kos and other nearby islands, released a statement in Greek, English and French on Aug. 12.

The PAME statement said in part: “The problems created by the staying of migrants in open areas without the minimum hygiene measures, causes justifiable concern among the residents. …

“You cannot blame the migrants who were ‘uprooted’ from their countries and their homes to save their lives and seek their future in another country, and not blame the imperialists who are setting up wars and conflicts in the world, sowing poverty and misery, which eventually prevent the migrants from reaching their destination.”

Besides confronting the austerity imposed on the Greek people by the German and other European imperialists, the union federation is expressing solidarity with the refugees fleeing imperialist-inspired violence in their home countries.

Most of the refugees on Kos and throughout Greece are from Syria. Since the imperialist-inspired campaign to remove Syrian President Bashar al-Assad, 2 million Syrians have been displaced and are living in Turkey, where they are not allowed to work or attend school. There are also significant numbers of refugees in Turkey from Afghanistan and Pakistan.