Workers World publishes this guest article by Sergei Kiritchuk, a leader of the Ukrainian revolutionary organization Borotba who has been exiled in Western Europe for the past year. 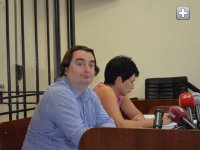 Aug. 17 — Igor Guzhva is one of the most profiled journalists of Ukraine. He has been daring, however, not to follow the political narrative of the government and Ukrainian nationalism at large. Therefore the authorities have been prosecuting him, and seem to take the final step in silencing one of the few remaining dissenting voices.

Since May of 2014, the Ukrainian authorities, as well as extremist right-wing organizations, have repeatedly undertaken all manner of actions against the Vesti holding and its head Igor Igor Guzhva (the holding includes the newspaper, Internet site and radio station of the same name, the magazine Reporter and the television channel UBR).

On May 22, 2014, the activities of the editorial team of the Vesti newspaper, which is the largest daily newspaper in the country, were entirely locked down by personnel of the tax police on the pretext that they were carrying out a search. It should be noted that this happened two days before the presidential elections in Ukraine, despite the moratorium declared by the authorities on checks on the mass media.

It was at this point that it became known that there was an investigation into non-payment of taxes by Vesti. Toward the end of the summer of 2014, the investigation of this case stalled as a result of the clear absence of any crime, and the authorities decided to use different mechanisms to battle against the Vesti holding.

Thus, representatives of the right-wing extremist groups, headed by the notorious Kiev neo-Nazi Oles Vakhny, who had previously been convicted for pogroms, smashed up the editorial offices in the summer of 2014.

In September of 2014, the newspaper’s work was again brought to a halt under the pretext of a search, but this time it was not carried out by the tax police — it was carried out by the SBU, the Security Service of Ukraine — on the grounds of another fabricated investigation, this one into alleged offenses against the territorial integrity of Ukraine. This resulted from articles in Reporter magazine, where quotations of the opinions of separatists in the Donbass were given alongside the opinions of those supporting a united Ukraine.

However, despite all these actions, the Vesti holding company continued to function. Thus, at the end of May of 2015, the authorities decided to return to the already forgotten “tax” case. By then, the State Fiscal Service of Ukraine, through a direct forgery of the evidentiary base, made a complaint against the founder of Vesti newspaper, the limited liability company Vesti Mass-Media (its director was Igor Guzhva) for the non-payment of 17 million griven (about $770,000) in taxes. The case was clearly fabricated.

This is the background to the case:

In 2013, when Vesti needed money to launch the project, it took repayable financial assistance from the firm Ledis. Many enterprises that are experiencing cash deficiencies/gaps operate in this way. According to the agreement, Vesti was to return the resources at the end of 2013, but this time period was later extended to the end of 2014.

The tax authorities established the fact of the presence of the agreement on repayable financial assistance as well as that the banking payments were carried out under this agreement.

In 2014, organs of the State Fiscal Service blocked the work of the firm Ledis and arrested its accounts. Because of the block, Vesti could not return the financial assistance to the firm.

What did the tax authorities do? Without any grounds to do so, they requalified the repayable financial assistance as non-repayable and insisted that it be included in the gross income of Vesti Mass-Media LLC for 2014 and that income tax be paid on it accordingly. Changing the character of financial aid from repayable to non-repayable is a clear case of deliberate forgery and falsification. The authorities did this despite the fact that all the documentation, where it can clearly be seen that financial assistance was repayable, had been provided by the company to the fiscal authorities.

It is clear that the tax authorities substituted the concepts and falsified the evidentiary base with one clear goal — to fabricate corpus delecti (the crime of non-payment of tax on profits).

Vesti did not include the repayable financial assistance in its gross income because — according to article 135 of the tax code — this only has to be done where the debt is written off. That will only happen when the limitation period runs out, as it will after three years, in 2017. Such a norm is entirely logical, as Vesti was not in possession of any information as to whether the firm Ledis had passed on the right to retrieve the debt to third parties.

Thus, if Vesti were to include repayable financial assistance into its gross income now and to pay taxes on it, then no one could guarantee that at any moment over the course of the next three years a third party would not make a claim for the retrieval from Vesti of the amount of the financial assistance. Similarly, the amounts paid as taxes, of course, would never be returned.

Vesti is currently involved in legal proceedings with the tax authorities with regard to this matter. The chances that Vesti will win this case are very good. However, the criminal case, which is constructed on an obviously falsified base, is continuing to run its course, allowing the state authorities to carry out various repressive actions against Vesti. These actions include the freezing of accounts, the carrying out of “masked shows” (where masked officials carry out searches) and the arousing of suspicions.

It was not long before the tax authorities acted. At the beginning of June, all 200-plus personnel of Vesti Mass-Media LLC, including freelance writers and employees who had already resigned, received summonses for interrogations.

In mid-June, the editorial offices of Vesti were for a third time cordoned off — they were searched by the tax police. And, finally, in July of 2015, the editor-in-chief of Vesti newspaper, director of Vesti Mass-Media LLC and head of the Vesti holding, Igor Guzhva, was accused of non-payment of taxes.

On July 29, it was announced that Igor Guzhva had sold his share in the capital of Vesti holding and left all of his posts there. Igor Guzhva himself has not commented on the current situation, but according to mass media sources, this decision could only have been taken under pressure that the authorities put on the investors in the project. According to a series of Ukrainian media exports, in order to improve relations with the authorities, the investors forced Igor Guzhva to leave the project.

This, however, didn’t bring an end to the pressure being put on Igor Guzhva. On July 31, he announced that he was returning from his holiday to Ukraine, and on the same day the Ukrainian mass media carried reports that he was on police wanted lists and that he would be arrested on his return to the country. Guzhva deemed these reports to be an act of intimidation aimed at preventing his return to the country. Despite the risk of arrest, he returned to Ukraine as he had planned to do on Aug. 1.

He wasn’t arrested at the airport, although representatives of the tax service presented him with a notification that he was being investigated.

Then, in accord with the requirements of Ukrainian legislation, a court hearing was held at which restraints were to be set for Igor Guzhva pending the investigation. It should be noted that the article under which Igor Guzhva is being accused (non-payment of taxes) according to the Ukrainian Criminal Code does not provide for any custodial sentences; the maximum penalty is a fine of 400,000 griven ($18,333). Accordingly, there could be only one restraint imposed by the court — the posting of a bond/bail. If such a bond could not be posted by the suspect, then the court could impose another form of restraint and even arrest him.

In view of this, the prosecutor’s office asked that the court set a record amount for Ukraine as the bond/bail — 17 million griven (which is 42 times more than the maximum amount of the fine that the article in question provides for). For comparison, those accused of murdering Buzina were released on bail of 5 milllion griven (about $225,000). One of the leaders of the Party of the Regions, Alexander Yefremov, had to post bail of 3.6 million griven (about $150,000) for his release.

Obviously, Igor Guzhva would have difficulty posting a bail of 17 million griven, which would mean that the term of restraint that could be imposed on him would be arrest.

At the same time, the unprecedentedly high amount of the bond/bail attracted a great deal of mass media attention to the case and a great deal of disapproval among the general public. In these circumstances, the court decided to compromise with the clearly repressive requests of the prosecutor’s office and reduced the amount of the bond/bail from 17 million to 1 million griven (about $45,000).

At the same time, the court limited Igor Guzhva’s freedom of movement, forbidding him from going abroad or leaving the city of Kiev.

The case is now being readied for court. However, Igor Guzhva believes that the authorities could attempt to bring new cases against him, which would allow stricter limitations to be imposed on him, even arrest. Igor Guzhva has also announced that unidentified individuals are following him. According to his statement, the secretary of the SNBO (National Security and Defense Council of Ukraine), Alexander Turchinov, is coordinating the actions of the authorities against Vesti and Guzhva.

Answering a question as to why the authorities are continuing to put pressure on him despite the fact that he has left the Vesti holding, Igor Guzhva has said that this may be the result either of vengeance for his work as head of the holding and editor-in-chief of the newspaper, or a wish to prevent him taking part in new media projects.

“The Vesti holding and I, as its head, over the course of the last year have provided an example of how a repressive state system can be resisted. That is what annoyed the authorities. I don’t count out the possibility that it is precisely for this reason that they are continuing to put this unprecedented pressure on me through clearly fabricated criminal cases. They’re putting pressure on me so that others won’t risk providing any resistance to the system,” said Igor Guzhva in one of his recent interviews.

It should be noted that the authorities have accused Vesti of “anti-Ukrainian activities.” At the same time, the editorial team has denied these accusations and said that it is a blatant lie aimed at putting pressure on the holding. Igor Guzhva himself has always stressed that the editorial team has taken a pro-Ukrainian stance; but unlike many other Ukrainian mass media, it does not believe that a war is grounds to put a ban on any criticism of the authorities.

The newspaper regularly published materials that raised acute issues in Ukraine — corruption, the impoverishment of the population, issues involved in mobilization and the leadership of military actions in the East; it has published the opinions of experts who have criticized the course taken by the authorities. In addition, Vesti was one of only a few Ukrainian publications that attempted to provide coverage of the war in the East from different points of view, giving an objective view of events and the opinions of people on both sides of the front line.

Igor Guzhva, in one of his interviews in June of 2015, also stated that representatives of the authorities had approached him as co-owner of the holding with a proposal that he give (not sell, but give) a share in the corporate rights to representatives of the authorities in exchange for pressure being taken off him. Igor Guzhva refused to do that, after which the problems with the holding continued.