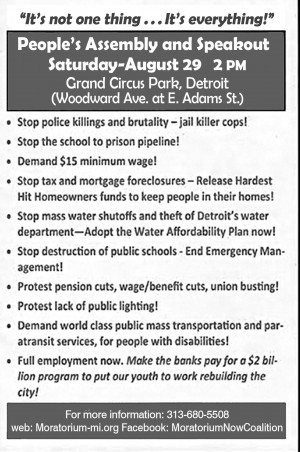 A recent study of residential patterns and employment availability in the Detroit area has exposed the lie told by the corporate media that this majority African-American city is undergoing an economic resurgence.

Reporter Mike Wilkinson described some of the truth in Bridge magazine: “Hundreds of thousands of city residents, many without access to a car, live in areas where there are fewer than 200 jobs for every 1,000 residents, neighborhoods that are miles away from where most jobs can be found, both in and outside of the city. Nearly 80 percent of city residents live over 10 miles from a central business district, one of the highest rates of the country.” (Aug. 6)

Corporations such as the auto companies that took jobs out of the city are heavily responsible for the present situation.

Successive administrations in Washington, D.C., and Lansing, the Michigan state capital, have refused to initiate jobs programs that could employ hundreds of thousands of people on a permanent basis.

With the decline in jobs and subsequent drop in population and falling tax revenues, the city was forced to borrow from banks. This ensnared the city in predatory arrangements that drained Detroit further. All of this came to a head during the recession of 2007-09, causing further disaster.

The city of Detroit was forced into emergency management and bankruptcy during 2013-14 on the pretext that it needed major financial restructuring. This process suspended bourgeois democratic rights — pushing aside the elected government. Meanwhile, city workers, retirees and residents witnessed the wholesale theft of at least $7 billion in health care and pension benefits. This theft benefitted the banks and financial institutions that caused Detroit’s massive home foreclosures, devastating neighborhoods throughout the city. The sell-off and seizure by the state of public assets such as Belle Isle, the Detroit Water and Sewerage Department, Detroit Public Works and the Detroit Institute of Arts were also in the works.

Take from the poor, give to the rich

Presently, hundreds of millions of dollars in tax breaks are being given to two leading billionaires whose businesses are based in the downtown area. Pizza magnate Mike Illitch, who owns the Detroit Tigers Major League Baseball team, and Dan Gilbert, CEO of Quicken Loans, have greatly benefitted from the restructuring through donated public land and real estate speculation funded through taxes.

None of this large-scale transfer of wealth that accompanied the denial of civil and economic rights has trickled down to benefit the majority of residents. Poverty, joblessness, educational decline, water shutoffs, foreclosures and evictions continue unabated.

Tens of thousands of property tax foreclosures have been carried out, and homes in the city will now be auctioned off to real estate developers, causing the eviction of thousands of homeowners and residents.

Gilbert chairs the Detroit Blight Removal Task Force, which targets properties throughout the city for seizure through the Detroit Land Bank Authority. The principal focus of the seizures is residential properties, not the thousands of abandoned factories, warehouses, commercial structures and schools.

More than $200 million allocated under the federal Hardest Hit Fund in 2009 remain in state coffers. Despite this, the Wayne County Treasurer and other public officials have not filed suit against the state and the U.S. Treasury Department for failure to use the funds for their original purpose — to keep people in their homes.

Tens of millions of these dollars are being misused by Gilbert and his task force to tear down homes. Instead, these homes could easily be rehabilitated, creating thousands of jobs and revitalizing communities. Gilbert is currently being sued by the Department of Justice for mishandling Federal Housing Administration loans.

Economic “development projects” are underway. These are geared to maximize profits for the rich by utilizing expropriated public assets and tax revenues. Meanwhile, the people of Detroit are being denied the right to decide how public funds are being used in the city.

A petition drive is underway to place the proposed regionalization of the water system in a ballot initiative. The Detroit Active and Retirees Association (DAREA) is spearheading the petition drive.

This burgeoning struggle will be the focus of an upcoming People’s Assembly and Speak-Out on Aug. 29 in downtown Detroit.

Issues to be discussed include the rise in police killings of civilians; the demand for a federal and bank-funded jobs program to rebuild the city; and the restoration of public control of Detroit Public Schools, which have been under emergency management in one form or another for over a decade. Ending foreclosures, evictions and utility shutoffs; the release of the Hardest Hit funds to assist homeowners; freedom for Michigan political prisoner Rev. Edward Pinkney; support for African-American shop owners and taxi drivers being driven out of downtown; and other struggles will also be addressed.

For more information, contact the Moratorium NOW! Coalition to Stop Foreclosures, Evictions and Utility Shutoffs at moratorium-mi.org or call 313-680-5508.