Corn, melons, squashes and other crops, along with sheep and cattle — these are what the Diné (Navajo) farmers grow and raise along the San Juan River in the Navajo Reservation in New Mexico. They use the water from the river to irrigate their crops and provide water for the livestock. Except that now they can’t. 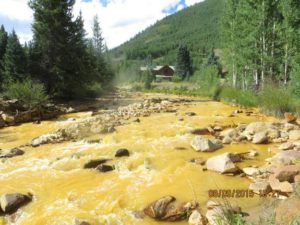 Photo of Cement Creek in Silverton, Colorado, after the Gold King Mine contaminated it.

The Navajo Times reported on Aug. 5, instead of first removing and treating contaminated water from the closed Gold King Mine near Silverton, Colo., excavators hired by the federal Environmental Protection Agency breached a wall at the mine, causing 3 million gallons of yellow-orange waste water to be dumped into nearby Cement Creek, which flows into the Animas River and then into the San Juan River.

Many communities in Colorado, New Mexico and Utah are also threatened by this spill. Much of the heavy metal settles in the river bottom, only to be stirred up by future storms and washed downstream. This contamination may last for years.

Particularly hard hit is the Navajo Reservation, the largest Indigenous territory in the country. Stretching across portions of Utah, New Mexico and Arizona, at 27,000 square miles it is larger than 10 of the states in the U.S. Its population now surpasses 250,000. Diné language and culture are scrupulously maintained. More than 750 families live and farm near the contaminated San Juan River.

No apology from U.S. government

The EPA waited 24 hours before notifying the Diné and other communities of the spill. The agency then distributed through its website a claims form that contains the disclaimer: “I […] agree to accept said amount in full satisfaction and final settlement of this claim.” As Navajo President Russell Begaye pointed out, this form contains “offending language.”

“Once the claim is made it will only be for the claims suffered to date and precludes future claims,” Begaye said. He has directed Diné citizens not to sign these claim forms. (time.com, Aug. 12)

After finding out about the EPA spill, the Navajo government sprang into action. It launched Operation Tȯ Łitso or Yellow Water. This name is a grim reminder of a uranium waste pond spill of 1,100 tons of solid radioactive mill waste and 93 million gallons of acidic and radioactive waste water into a river tributary in New Mexico in 1979. That spill is still causing health problems for Diné people 36 years later.

Command centers have been set up and legal action against the EPA is being prepared by the Navajo government.

According to a Navajo government press statement on Aug. 11, Dr. Peterson Zah spoke in the Diné language at the Oljato Council meeting on the reservation about the current emergency and its historical background. Zah recalled Kit Carson’s scorched earth campaign against the Diné people and their forced Long Walk migration into the reservation, as well as the 1979 uranium waste spill disaster.

About this current crisis, Zah said: “What I was looking for [from the EPA] was an apology. We didn’t even get one. I wanted to hear from the U.S. government that they were sorry.

“Many years from now, the Navajo people will still be here on our tribal lands,” Zah said. “They keep trying to get rid of us, but we’re still here surviving.”

When Arizona Republican Sen. John McCain went to the Navajo Nation’s capital, Window Rock, on Aug. 14, angry Diné and Apache protesters, many of them youth, decried violations of their water rights and copper mining in Oak Flat, Ariz.

Deidra Peaches, a Diné woman, said, “The activists were from all over [the West] and came to show inter-tribal solidarity. … McCain and his entourage were definitely thrown off.” (phoenixnewtimes.com, Aug. 17)

During his visit, McCain was confronted by protesters throughout the day who chanted in the Diné language, “Water is life!” and held banners reading, “McCain = Indian Killer” and “McCain’s not welcome here.”

McCain is a staunch supporter of copper mining interests in Arizona. When high school senior Adriano Tsinigine, an Apache, saw the senator and Republican Gov. Doug Ducey surrounded by people trying to shake their hands and take photos, he seized the moment. Tsinigine pushed his way up to the senator. “I pulled out my [Protect] Oak Flat card. He took it, looked at it, and threw it back at me.”

McCain was driven off Navajo land and chased by activists all the way to the airport.

In a statement released later that day, the protesters stood firm: “We will rise up as the new leaders of our Nations in solidarity with our Indigenous brothers and sisters, and we start by saying NO MORE ALLOWING state or federal politicians and the corporations they represent entrance into our homelands.”

Kris Hamel contributed to this article.