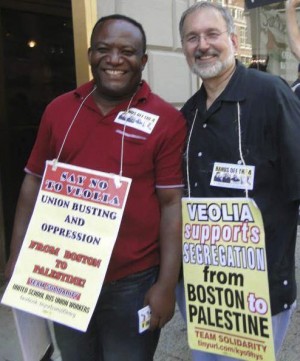 This notorious corporation has earned the wrath of progressives throughout the world, from those seeking justice for Palestine, including the Boycott, Divestment and Sanctions movement, to environmentalists, anti-privatization activists, and fighters for labor and the rights of disabled people.

While the Boston Public Schools management and Mayor Marty Walsh  should have ultimate control of their contractor, Transdev/Veolia, this evil corporation’s actions in its two-year battle with the school bus drivers raise questions about whether this is a case of “the tail wagging the dog.”

To investigate more about Veolia’s tactics,  WW reached out to others across the country who have had run-ins with Transdev/Veolia.

Workers World: “Why did BART management engage Thomas Hock of Veolia on their negotiating team during negotiations for the BART contract?”

Chris Finn: “BART has a notorious history of labor relations. Despite a concessionary contract in 2009 following the start of the Great Recession, and both managers and members of the Board of Directors acknowledging they would need to reward the workers in 2013 for their role in helping the agency’s financial state, BART hired Tom Hock in October 2012, writing that they determined well before negotiations began that they would need to engage in “traditional” bargaining practices, which is the adversarial form, compared with what is known as Interest Based Bargaining.

“An independent consultant hired by the BART Board of Directors to look into what went wrong with the 2013 negotiations stated in the 225-page public report that Hock was one of the main problems and that he knew and informed management early on that the position they took would cause a strike. ATU had representatives from around the country come to the Bay Area to discuss the role of Tom Hock in causing public transit strikes when he was at the table.

“The strikes were unfair labor practice strikes, based on a growing number of ULPs. Hock’s strategy was to force a strike and try to outlast the union. There were no attempts to bargain and reach resolution.”

WW: “What role did Hock play during the negotiations?”

CF: “He was the chief negotiator for BART. He wasn’t initially hired for that role.  He was hired supposedly as a consultant to assist, but they ended up moving their own head of Labor Relations to the side and upping Hock’s contract to take over as chief negotiator. Even when he was sent back to Cincinnati, he attempted to prevent BART from negotiating an agreement with the unions and ending the strike.”

WW: “What was the outcome of your struggle?”

CF: “BART ended up receiving a lot of bad press and being seen as having lots of problems. They received a 225-page report outlining the main problems with BART negotiations. We ended up with a 4-year contract. Hock was gone by then. He was sent away before negotiations were concluded. We had three federal mediators there and had the framework for a deal while Hock was out of town for a few days. When he came back, he piled on a few concessions that were guaranteed to cause a strike, which was what precipitated the second strike when the two fatalities occurred. He left at the beginning of the second strike to go to Cincinnati and BART finished it without him, though he was still attempting to prevent them from settling.

“We also had a bunch of ‘last best final offers’ — at least six, maybe more, all trying to provoke a strike, loaded with major concessions.” 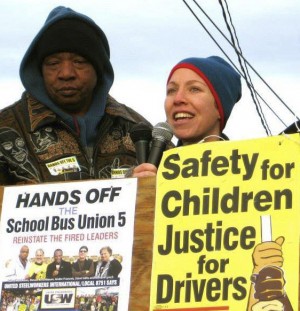 Workers World also reached out to Susan Koppelman of “Stop Veolia Seattle,” where Veolia has had the contract for MetroAccess Paratransit service for disabled and elderly people since 2008.  At that time, 140 drivers represented by ATU Local 587 either lost their jobs or were forced to take pay cuts.

The initial low-bid contract represented an annual $1 million cost savings to the county, but after the first year costs went up.  For the last four years, the county has paid at least $7 million more per year. (See Koppelman’s article, “Pressure mounts on executive Constantine to take action on Veolia,”  in the March 26 South Seattle Emerald.)

WW: “How has Veolia/Transdev earned the wrath of so many people worldwide?”

“Dating back to an imperial decree of Napoleon III, some of the first contracts this company held were providing public services to the French colonies, so there’s a direct line between the founding of the company and Veolia’s role in occupation, colonization and imperialism today.

“Veolia is the largest privatizer of public water services in the world. Repeatedly Veolia has been found guilty of overcharging residents for water, while criminally underinvesting in water infrastructure, jeopardizing public health and safety.

“In 2010, Paris ended its contract with French multinational Veolia and was able to lower the cost of water to consumers while also increasing investment in the public water infrastructure, proving that alternatives to privatization are not only viable but are greatly preferential.

“In 1996, consumer groups in Tucumán took action to halt Vivendi’s escalation of the cost of water to residents in the poor province. But the World Bank’s International Centre for the Settlement of Investment Disputes ultimately ruled that the company had ‘a right to make a profit’ and awarded the company $105 million in damages, an amount nearly equal to 10 percent of the public debt of Tucumán province.

“Trade agreements like the Trans-Pacific Partnership will only tip the scales further in favor of massively powerful corporations. It is imperative that we continue to take on corporate giants like Veolia and work for trade agreements that protect the rights of residents and the environment and maintain water as a public trust that cannot be sold to the highest bidder in the hopes of achieving racial and economic justice.

“We must not allow corporations like Veolia to come in and profiteer from natural disasters or ongoing military occupation, like they have following Hurricane Katrina in New Orleans and in Palestine.”

WW: “How did you come to learn about the Boston school bus drivers’ struggle against Veolia?”

SK: [It was] “after I was already active in campaigns against Veolia for a number of years. I had the honor of meeting some of these incredibly strong and courageous drivers in the neighborhood where my grandmother grew up and where my father was born. I’m inspired by their epic stand for justice against these corporate bullies, and pray that the fired workers will have their jobs reinstated immediately.”

Oppose Veolia from Boston to Palestine

Dalit Baum, American Friends Service Committee’s Middle East Peace education director and co-founder of “Who Profits from the Occupation,” a research center, gave additional input.  She explained how the BDS movement supporting Palestine had successfully forced Veolia to sell off most of its companies supplying water and transportation services for illegal settlements in Occupied Palestine.

Whoprofits.org reported in September 2013, “Veolia is still involved in the occupation; in transferring waste to Tovlan landfill in the oPt [occupied Palestinian territories] through a subsidiary and in the light train through its shares in CityPass and Connex Jerusalem.” It further states that Veolia Environnement, through its subsidiary Transdev, still holds a 5-percent share in the CityPass Consortium, and Transdev fully owns Connex Jerusalem, which operates the trains.

The USW Local 8751 bus drivers, with a mostly Haitian and Cape Verdean workforce, regularly show solidarity with other workers.  This militant local supports the Black Lives Matter movement, as well as the struggles for rights for lesbian, gay, bisexual, transgender and queer people and for people with disabilities. Importantly, these workers stand with the Palestinian people and oppose Veolia’s role on their occupied lands.

It is time now for everyone to stand with this fighting union local in its final push for justice for its members and the schoolchildren of Boston.