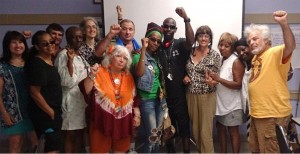 The Rhode Island People’s Assembly — which fights against racism, war, economic exploitation and environmental destruction — held a summer assembly in Providence on Aug. 15. The assembly brought out 30 people — despite blazing heat — to discuss how to advance the organization as a multi-issue home for workers, and poor and oppressed peoples in the state.

The group’s organizers emphasized the importance of studying major past events — such as Black August, which honors fallen African-American freedom fighters, and the Watts Rebellion — in order to better fight now for a future which guarantees freedom for the oppressed and economic security to all poor and working people.

Myia X of the Boston Women’s Fightback Network led a discussion of a Providence-Boston plan for a new Freedom Charter for people of color, and an Economic Bill of Rights for all poor and working people.

Participants brainstormed on how to build a strong organization based on Black-white solidarity and unity in action through education and mobilization.  Their ultimate goal is to create a liberated, socialist future where “we can all breathe free, free from police, bill collectors, pollution and the other ills of the system.”