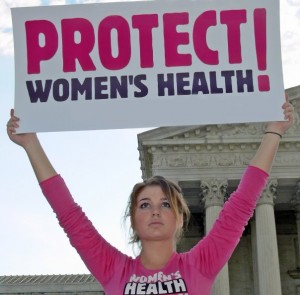 Amidst the ratcheted-up misogyny on display by the ranks of the Republican Party, the right wing has unleashed a full-out attack on Planned Parenthood Federation of America. For almost a century, PPFA has provided all kinds of health services to women across the country, from family planning — including abortions after they became legal in 1973 — to preventative health care. The right wing’s newest blitz involves deceptively manipulated video footage that they claim shows a PPFA official discussing how much the organization charges to release fetal tissue for medical research.

Setting aside for now the important issue of fetal tissue for medical research, Marxism 101 tells us that the capitalists — bolstered, in the U.S., by their two-party system — are first and foremost interested in profits, in providing just enough in social services so that underpaid workers will not revolt. The situation is no different in this case. The right wing is now pushing for government defunding of PPFA, even though the organization has repeatedly stated that it does not use government funds for abortions.

This attack amounts to yet another attempt at austerity on the backs of the workers. The capitalists want most of the workers’ tax money to finance their foreign wars, repression at home and massive subsidies to private corporations. They want to cut the budget for everything else, even going so far as to vilify an organization that provides essential life-saving services to millions of low-income people who could not afford them otherwise.

Claiming that the issue is abortion is an attempt to assert the outrageously hypocritical moral high ground that, incredibly, involves denying the right of health care to many. In 2012, Families USA reported that more than 26,000 people died from a lack of health care in 2010 alone. This rich country needs and can afford socialized medicine, covering everyone free of charge.

While Workers World vehemently defends the right for everyone to procure abortions, it is ironic that these same anti-abortion forces — who often also rail, in the most racist, anti-worker terms, against single motherhood, so-called “welfare moms” and children born into poverty — conveniently ignore the fact that, in 2014, 34 percent of PPFA’s services went to contraception and only 3 percent toward abortion. The majority of their services — 42 percent — went toward screenings and treatment of sexually transmitted infections, while 9 percent were for cancer screening. (PPFA 2013-14 Annual Report) The Guttmacher Institute reports that some 2.4 million people received contraceptives from the organization in 2010. (theweek.com, Aug. 10)

The right to health care, including abortion and the full range of reproductive rights, is a women’s issue as well as a working-class issue. Workers World applauds and defends PPFA and its tenacity through all the years of continuing attacks against it. We continue to fight for reproductive justice and the right for all to build families of their choosing, without the threat of premature death from a lack of health care, police brutality or racist, sexist, anti-lesbian-gay-bi-trans-queer attacks.