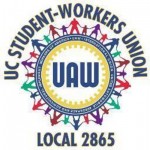 “We, UAW Local 2865, call on the [AFL-CIO] to end their affiliation with the International Union of Police Associations.” So begins a stirring, long-overdue resolution passed July 25 by the union representing some 13,000 University of California student workers. Titled “Denouncing Police Unions,” the resolution asks, “How can there ever be solidarity between law enforcement and the working class when elites call upon police and their organizations to quell mass resistance to poverty and inequality?” It specifically mentions the needs of Black workers and communities and cites the death of Freddie Grey in Baltimore and the importance of the Black Lives Matter movement.

The resolution exposes the role of police unions in lobbying against police accountability legislation, shielding killer cops from prosecution and defending officers’ crimes of racist brutality in court. The resolution takes aim at the institution of policing itself: “Policing in the U.S. has always served the needs of colonialism, racism, and capitalism by protecting the property of those who would steal land and exploit the labor of others.” The full text is at tinyurl.com/q5opgje.

The last time UAW 2865 made headlines was in 2014 when it became the first major trade union to endorse the “Boycott, Divestment and Sanctions” campaign against Israeli apartheid, reported in Workers World’s Dec. 28, 2014 edition. (inthesetimes.com, July 27)

Despite $18 billion in profits in the last 18 months, Verizon still insists on slashing job and retirement security, while hiking health care costs by the thousands. Ed Mooney, vice president for Communications Workers District 2-13, representing workers from Pennsylvania to Virginia, said, “We’re not going to walk into a trap set by Verizon. We’ll strike when we think it is the right time to strike, and that is not tonight. The ball is in their court — we are waiting for them to get serious.” (cwa-union.org, Aug. 1) Stay tuned.

Contract negotiations between the United States Postal Service and the American Postal Workers Union broke down May 27 as the USPS’ latest “offer” revealed an enormous gulf between management’s interests and those of the workers. Whereas workers and supporters continue to fight for career-quality jobs with living wages and benefits, management’s insistence on cutting wages, eliminating cost-of-living adjustments and outsourcing union jobs forced a stalemate. Federal law requires at least 60 days of mediation to resolve a bargaining impasse.

On June 3, APWU President Mark Dimondstein called on postal workers to wear union gear to work every Thursday during the mediation process to show the union’s militancy in the fight for a fair contract: “Postal management pays attention to how many of our members are wearing union buttons, stickers and T-shirts, as well as how many union members are taking part in rallies and other events. They take it as a measure of the union’s strength.” (apwu.org, June 6 and June 12)

The New York City Council passed the Car Wash Accountability Act in late June, a law that requires the 200 car washes in the city to be licensed and regulated to prevent wage theft and environmental abuses. Facilities must post a surety bond to ensure workers’ wages. Since “Wash New York” was launched over three years ago, nine facilities in Brooklyn, Queens and the Bronx have won contracts that improved wages; won overtime, benefits and protections; and helped over 1,000 workers win over $4.5 million in back wages and other damages. Wash New York is a collaboration of “Make the Road NY” and “NY Communities for Change,” with support from the Department Store Union (RWDSU). (maketheroadny.org, June 30)

Meanwhile, wage theft continues in New York City. Bronx Papa John’s pizza franchise owner Abdul Jamil Khokhar pleaded guilty on July 15 to charges of failure to pay minimum wage and overtime to about 300 current and former employees — amounting to $230,000 in lost wages. This is the first criminal case in the U.S. by a state attorney against a fast food franchise for cheating workers. New York Attorney General Eric Schneiderman said this “sends a loud and clear message to every fast food franchise: if you steal wages you will be held accountable and you can go to jail.” Khokhar was sentenced to 60 days. (amny.com, July 16)