Aug. 1 marked the four-year anniversary of the tent encampment outside the U.S. Embassy in Bogotá, Colombia, by Asotrecol, the Association of Injured Workers and Ex-workers of GM Colmotores. Asotrecol began the occupation to protest the work practices at General Motors’ Colombian assembly plant. At that time, the U.S. government was GM’s largest stockholder and creditor under the terms of the 2009 bankruptcy bailout. 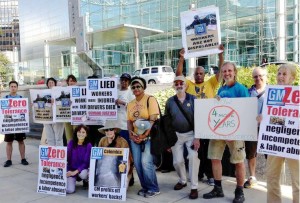 In Colombia, GM hires people when they are young and strong, makes them sign a waiver on their right to join the plant union, and then makes them work long hours under brutal conditions that leave them with debilitating injuries. Asotrecol members are fired after suffering such injuries, following which their medical documentation is falsified to show their injuries as non work-related, making them ineligible for workers’ compensation.

In 2012, Asotrecol members conducted a hunger strike, sewing their lips shut to draw attention to their plight. This led to mediation with GM, but talks broke down when Asotrecol refused to accept a paltry sum to settle their grievances. Since then, GM has refused to negotiate with Asotrecol.

The U.S. Embassy, which is supposed to monitor labor rights violations under the Labor Action Plan of the U.S.-Colombia free trade agreement, has been no help. When Asotrecol members chained themselves to the embassy building in protest, they were brutally beaten by embassy police. Asotrecol President Jorge Parra was detained and member Manuel Ospina suffered a fractured kneecap.

These heroic workers have persevered through tremendous hardship: living in tents, seeing their children go without and facing foreclosure. Their struggle has attracted worldwide support, including from Detroit activists who demonstrated July 31 outside GM world headquarters. In Colombia, labor delegations visit the encampment regularly. Injured oil workers, fired under similar circumstances, joined the encampment in February.

Asotrecol’s struggle has put pressure on GM; now workers injured in the plant are holding onto their jobs.

Asotrecol also found an ally in “Víctimas de Banqueros” [Victims of Bankers], which defends homeowners from eviction. Carlos Trujillo was able to stave off foreclosure almost four years. In May, Víctimas successfully blocked an eviction. His lender, Colpatria, committed mortgage fraud by illegally charging an exorbitant interest rate. In a sneak attack on June 24, with no notice and no chance for Víctimas to mobilize, riot cops arrived at the house. They evicted the family and detained Carlos overnight.

Now injured workers are facing an ominous threat from the Colombian government. Colombian President Juan Manuel Santos is soon expected to issue an anti-labor decree, giving the fired GM workers’ struggle a new significance. The decree allows employers to lawfully fire workers who are injured on the job, with a maximum six months’ salary severance payment. This will gut the legal rights of injured workers who won’t be able to pass physical exams for other employment and will, therefore, be left destitute.

This will “legalize” the illegal treatment of injured workers by GM, Coca-Cola, and foreign oil and mining interests.

This is one of many reasons union supporters are joining Asotrecol in the tents in an anniversary solidarity action on Aug. 3.