From a talk by Greg Butterfield at a Workers World Party forum in Los Angeles, July 23, 2015. 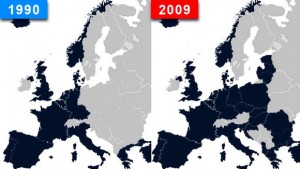 According to the United Nations, at least 6,400 people have been killed since the start of Ukraine’s so-called anti-terrorist operation in April 2014 against the Donetsk and Lugansk People’s Republics of the Donbass mining region bordering on Russia. This is widely understood to be a vast undercount. Donbass officials estimate 10,000 deaths, while a German intelligence report leaked last winter put the death toll closer to 40,000.

The number of casualties is growing. There is daily shelling by the Ukrainian Armed Forces and neo-Nazi volunteer battalions, in violation of the Minsk ceasefire agreements — often as many as 50 to 60 incidents in a single day.

The weekend of July 18-19 saw some of the heaviest shelling in months in downtown Donetsk, capital of the Donetsk People’s Republic. As usual, the attacks were concentrated on civilian areas, including a grocery store. Two civilians were killed. On July 22 alone, 76 incidents were recorded in and around Donetsk city, according to the Organization for Security and Cooperation in Europe.

Not coincidentally, the intensified shelling began two days after U.S. Assistant Secretary of State Victoria Nuland and U.S. Ambassador Geoffrey Pyatt appeared on the floor of Ukraine’s parliament in an unprecedented attempt to quell infighting among factions loyal to U.S. imperialism that have made up the Kiev government and state structure.

But let’s turn our attention closer to home. Many of you will remember an incident that happened one year ago here in Los Angeles. On July 1, 2014, a passing motorist captured on video the brutal beating of Marlene Purnoch, an African-American grandmother, by white California Highway Patrol Officer Daniel Andrew.

This horrendous incident came as no surprise to those who know the CHP’s notorious history of racism and brutality. But it may come as a surprise to southern California residents to learn that two weeks ago, the governor of Odessa, Ukraine, announced that the CHP will be training police there as part of the regime’s effort to weed out “disloyal” elements.

Odessa Gov. Mikhail Saakashvili also announced that Washington will be paying the salary for all his staff. This past Saturday, July 18, Saakashvili received the latest shipment of 100 U.S. military Humvees at the Odessa port.

Who is Saakashvili? He’s not from Odessa, or even from Ukraine. He’s a former president of the republic of Georgia, who fled corruption charges at the end of his term, and a well-known Washington stooge. He was appointed governor of Odessa by Ukrainian President Petro Poroshenko in May. The city of Odessa has suffered under violent occupation by fascist gangs since May 2, 2014, when anti-regime protesters were massacred in the House of Trade Unions.

This link between police brutality in southern California and fascist terror in Odessa isn’t just an interesting factoid. For us, as anti-war organizers, as Black Lives Matter and immigrant rights activists, as internationalists and communists, our most important challenge in the coming weeks and months will be to find ways to create a bridge between the new, militant movements of the oppressed fighting U.S. state-sponsored terror at home, with the resistance movements fighting fascism and imperialism abroad, including in Donetsk and Lugansk.

Why Ukraine? Why now?

Once we get a sense of the devastation that’s being carried out in the Donbass region, and the incredible amount of resources being poured into Ukraine and the surrounding region, we have to ask: Why Ukraine? And why now?

Why are hundreds of U.S. Army paratroopers in Lvov, western Ukraine, training members of the Ukrainian National Guard, including the neo-Nazi Azov Battalion? And why, despite an amendment sponsored by Rep. John Conyers and passed by the House of Representatives in June exposing the fascist character of Azov, is this training program on track to be expanded starting in November, according to Ben Hodges, commander of the U.S. Army in Europe?

Why has NATO carried out an unprecedented 14 war games in Eastern and Central Europe, Central Asia and the Alaskan Arctic in the past year? Why did the latest set of war games, called “Noble Jump” and held in Poland in June, include U.S. Special Forces rehearsing an attack on rebels in Donbass?

To be sure, Ukraine is a country rich in natural resources, once known as the breadbasket of the USSR, with powerful mining and other industries in the eastern region developed in Soviet times, and a well-educated, skilled working class. Since the destruction of the Soviet Union, it has served as a crucial gateway for transporting Russian oil and gas to the European Union. For all these reasons, Ukraine is desired by the Western imperialist powers. The chance to get hold of these resources was the main reason that Germany and other European Union powers supported the right-wing coup in Kiev in February 2014.

But the U.S. has greater ambitions. Not only does Wall Street crave Ukraine’s privatized industry and resources — not only does Monsanto want to control the fertile farmland — not only does Washington seek to control the flow of fuel to the countries in Europe that are both military allies in NATO and economic competitors — but at the heart of the Ukrainian crisis is the long-term U.S. strategy of overthrowing and breaking up an independent, capitalist Russian Federation.

And on July 9, during Senate confirmation hearings, the nominee to become the next chairman of the Joint Chiefs of Staff, Marine Gen. Joseph Dunford Jr., declared Russia the “greatest threat” to U.S. national security.

The Republican-Democratic “conflict” over arming Ukraine is a sideshow. Their differences are merely tactical. Sen. John McCain and the Republicans want to openly arm the Kiev junta, while President Barack Obama prefers to do it covertly, using third countries. For example, earlier this month, Ukraine inked an arms agreement with the Gulf monarchy of Qatar, a major U.S. arms client.

Suppressing and dismantling Russia has been a prime goal of both Democratic and Republican U.S. regimes since the fall of the Soviet Union more than 20 years ago. It was back in February 1992, during the waning months of the George H.W. Bush administration, that a Pentagon “Defense Plan” was leaked to the New York Times, which stated in no uncertain terms that the main U.S. aim was to “prevent the emergence of a new rival” in the post-Soviet world, and that Russia was the main target. This has been a guiding principle of bipartisan U.S. foreign policy ever since.

NATO has expanded by 12 members in Eastern Europe and the former USSR since 1999, with five additional states considered official “aspiring” members, including Ukraine, despite promises made by Washington to Mikhail Gorbachev before the fall of the USSR, and provisions of the 1997 NATO-Russia Founding Act.

This crisis is not going away. No matter who is elected president next year, no matter which capitalist party controls Congress, the campaign to demonize Russia, threaten the people of Donbass and repress the Ukrainian opposition will continue, and the danger of a wider war will grow.
Historically, wars have been used to derail fightback movements at home, from the Wobblies in World War I to the CIO in World War II to the anti-globalization movement after the 9/11 attacks. That’s why we must begin now to educate the anti-war movement and build links with Black Lives Matter, the Fight for 15 and the struggle for immigrants’ rights.